February 1:  I spent about 45 minutes cutting all of these strips for sashing and a border: 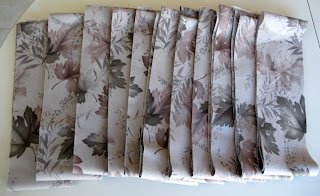 and trimming up these blocks: 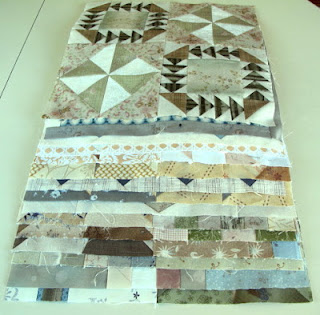 Here's a helpful hint.  You'll notice pins in some of those blocks.  They were to be trimmed to 12 1/2 inches. Some of them were a little short on one or two sides.  I put pins on the sides where they were short, so that when I sew on the sashing strips, I'll know to skooch the block over a bit so I catch less than 1/4 inch of it in the seam.  One of the blocks ended up only 12  1/4 inches on every side!  So, I pinned a note to it that says "Really small".  If the block didn't have, oh, a million pieces in it, I probably would have taken it apart and re-sewn it.

February 2:  I'm heading down to the sewing room shortly to start sewing on the sashing strips.

Linking up to Drop and Give Me Twenty at Quilting Hottie Haven.

Email ThisBlogThis!Share to TwitterShare to FacebookShare to Pinterest
Labels: Drop and Give Me Twenty

I love those blocks the combination of the colours and the pattern work together so well.

Looking good thanks for the tip

I've also had blocks that seem to be just a little too small. I think marking them with a pin is a great idea. I just might have to use your idea!