Stars Around The Garden - Finished!

I've got the binding all sewn down on Stars Around The Garden.  I couldn't be happier with the way this quilt turned out! 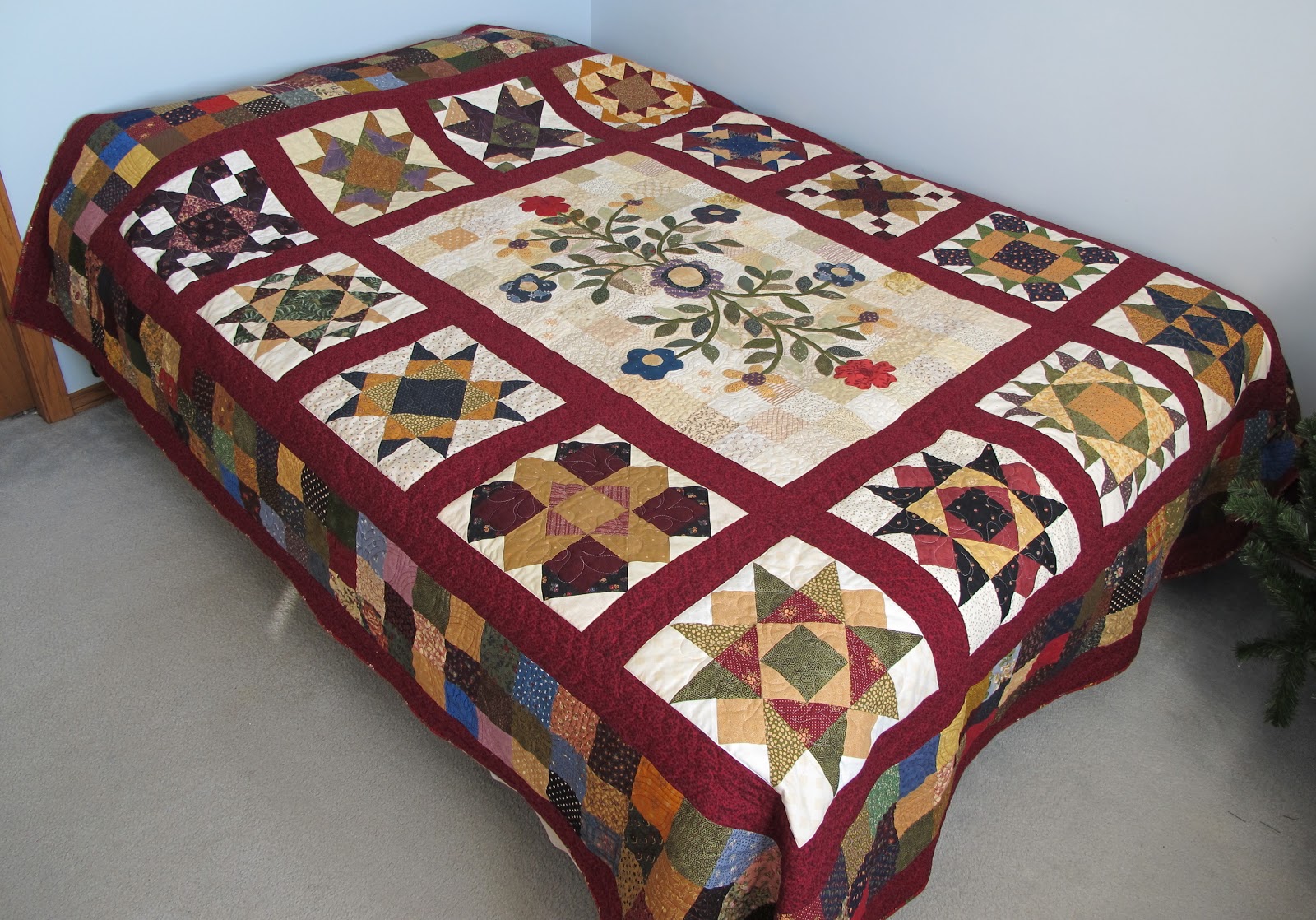 The pattern is by Bits and Pieces Designs.  I did it as a Saturday Sampler at local quilt shop that is, alas, no longer in business.  They provided all of the fabrics for the blocks.  I bought the sashing, choosing brick red instead of the green they had in the shop sample.  The quilt is huge - this is a queen size bed.  I'll have to measure it again, but I think it's around 96 x 108! 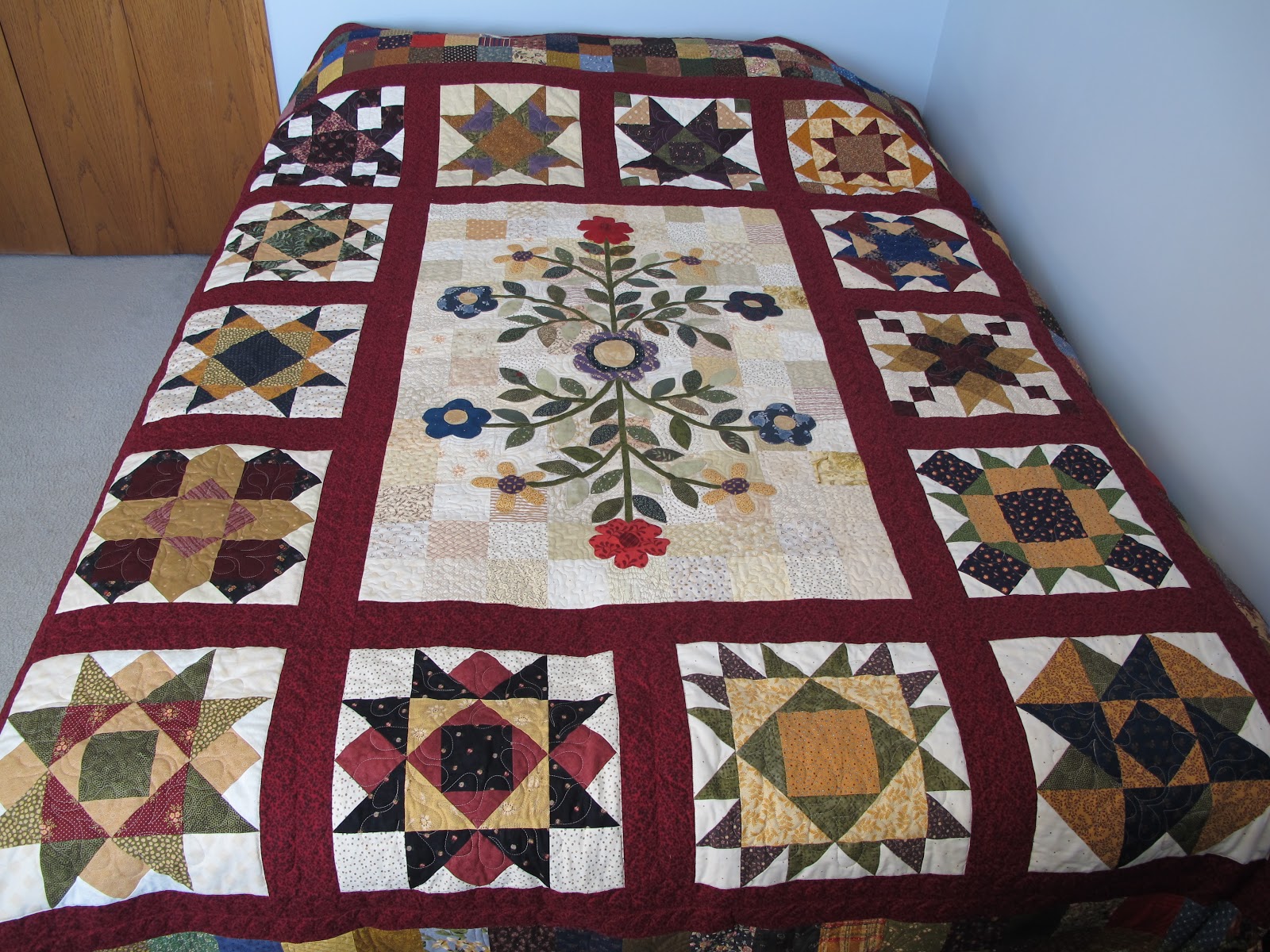 The quilt was quilted by the very talented Chelsea, at Pins and Bobbins.  Here are some close-ups of her quilting.  Click on the pictures for a better view.

She echo quilted the applique, then some free motion stippling around that: 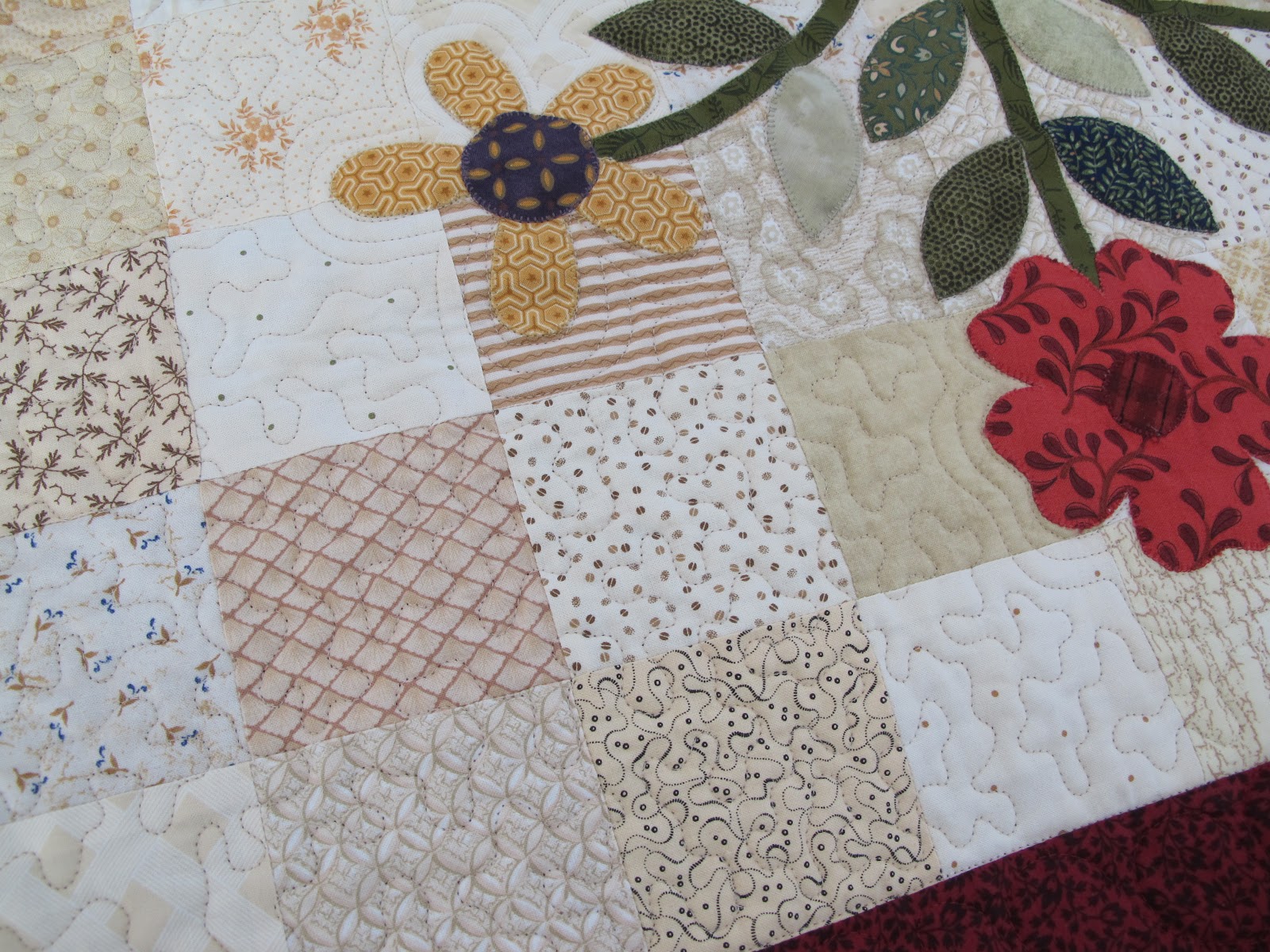 The pieced blocks each had a stencilled design that mirrored the gorgeous feathers in the sashing: 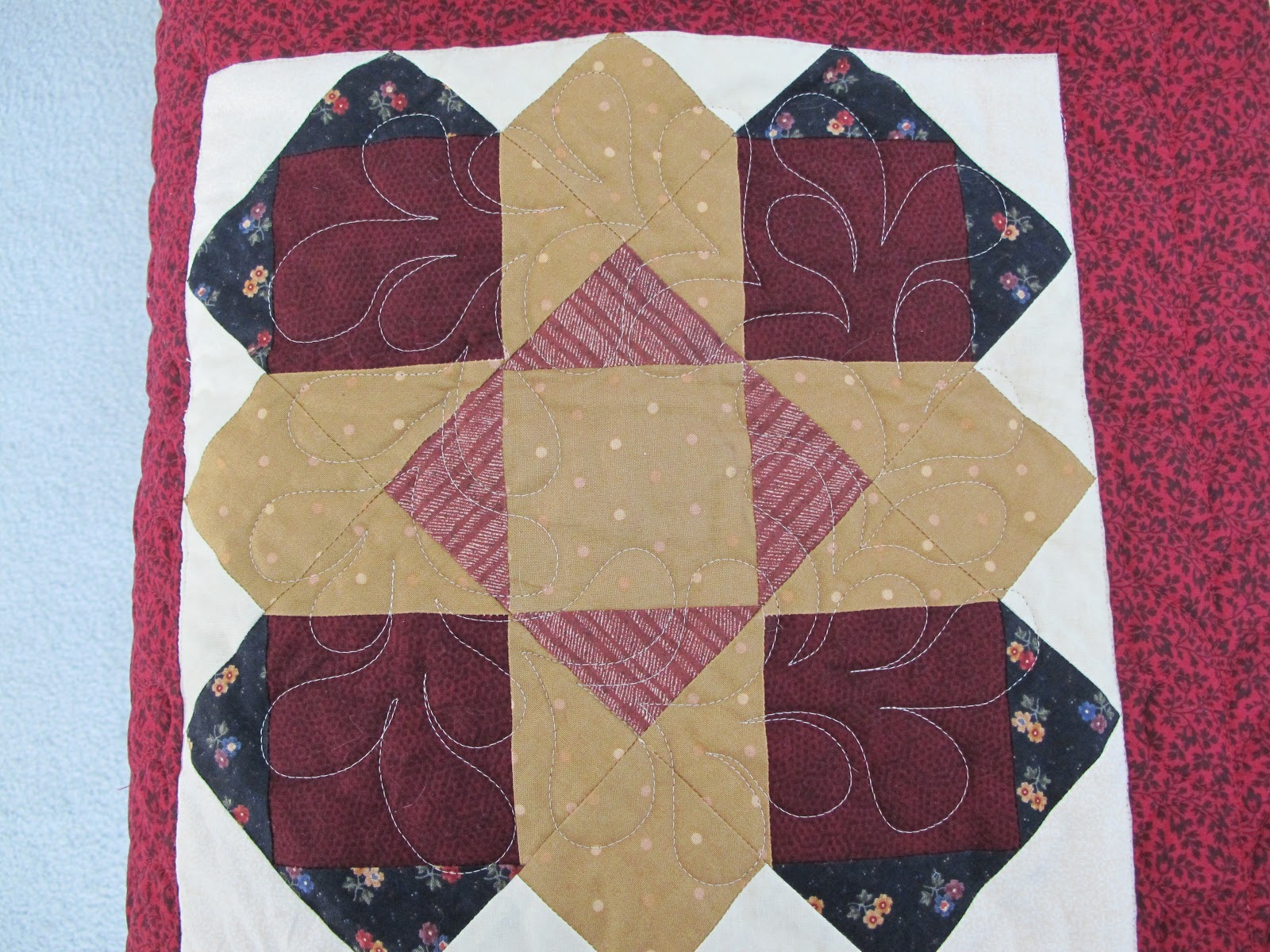 In the borders, she quilted leaves and flowers to mirror that applique, then echo stitched around them: 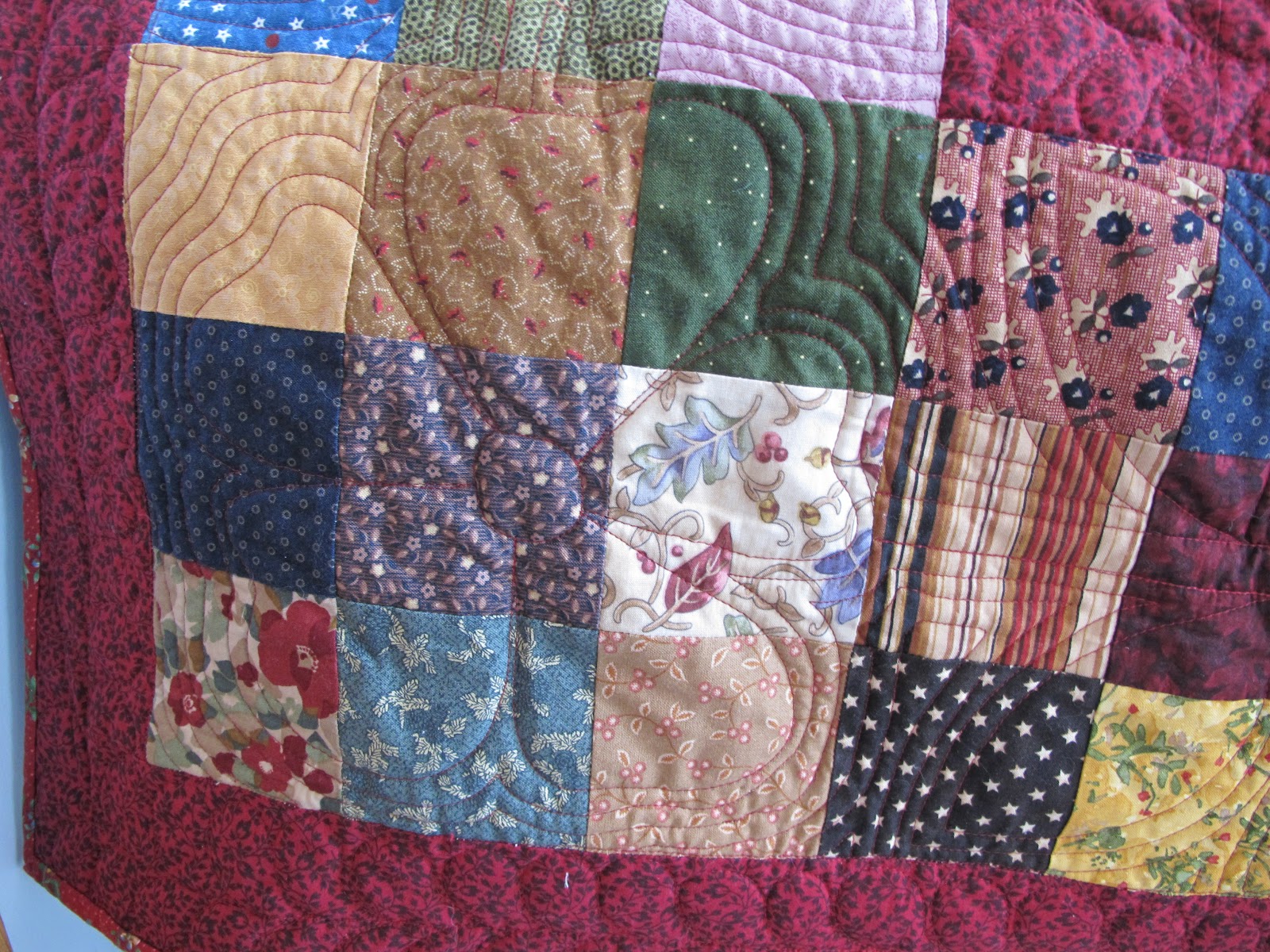 More of the border, and you can see the feathers better: 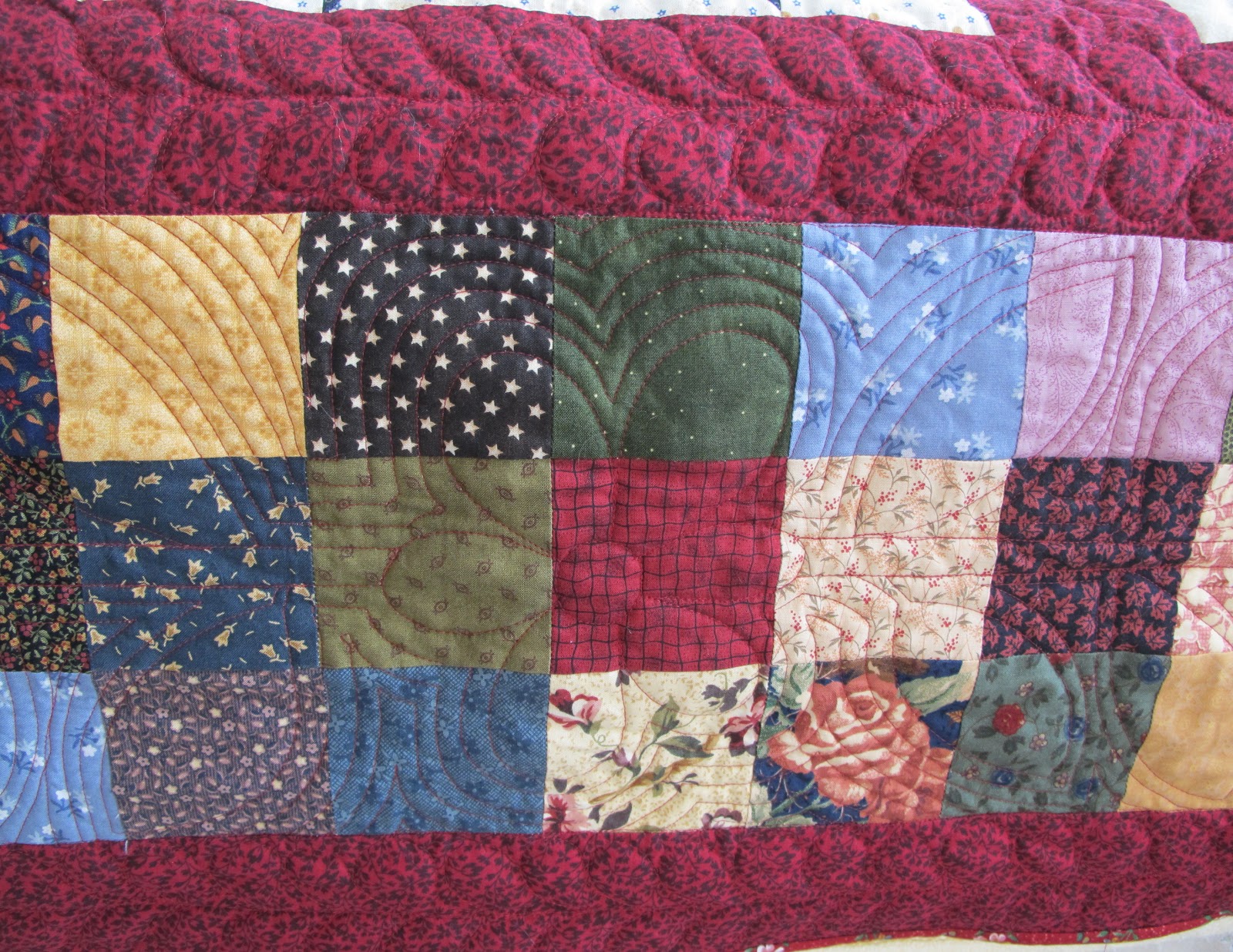 Thank you Chelsea - you have helped me create an heirloom!
Posted by Colleen at 21:08 8 comments:

Brye Lynn, over at Sew Stitch Create is organizing a Sew In for Saturday morning.  The details are on her blog.

Since it is supposed to be -19C on Saturday morning, and since it is currently snowing heavily outside, it seems like a good plan.  Maybe I'll see some of you there too.
Posted by Colleen at 20:41 2 comments:

Email ThisBlogThis!Share to TwitterShare to FacebookShare to Pinterest
Labels: SMSI

Finally, finally, I finished the Blue Bayou quilt for my son. 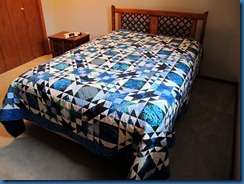 You’re may be thinking that my son has a very tidy bedroom.  Ha!  I thought about photographing it in his room, but decided you really didn’t need to be punished by having to look at the chaos in there.  Actuallly, I put the quilt on the guest bed to photograph it.

It feels so good to get a big quilt like this done!  When I decided to make this, I spent a lot of time collecting various fat quarters, as I wanted it to be really scrappy.  Many times, I came home with some fat quarters, only to find that they really didn’t go with the other blues I had chosen.   I had decided to lean towards teal, and there are even some bits that are green, but they don’t show up so well in the photo.  I spent about a year collecting the fabric – that’s really my favourite part of quilting, so why rush it?  Then, cutting hundreds of squares!

The pattern instructions were, in my opinion, annoying, as they told you to cut the squares into half square triangles, then sew them together in various combinations of dark, medium, light and white.  I would use the “draw the line diagonally across the square, then sew on each side” method, so I had to calculate myself how many of each combination I needed.  I do a fair amount of technical writing at work, so when instructions are vague or confusing – or not as efficient as they could be, it bugs me.   It’s not easy writing good instructions!

Here is an end-on photo that shows the pattern and quilting a little better. 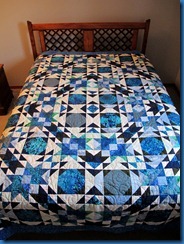 I just did an all over pattern, as the quilt is so busy, the quilting would not show anyway.  And, it’s easier!

The pattern is from Fons and Porter magazine – the January-February 2008 issue.  I made the mistake of throwing away the magazine without writing down the name of the designer.  I e mailed F & P to ask them, but they have not got back to me yet.  If any of you save old magazines, perhaps you’ll be able to tell me.

Today is a glorious day – sunny and above freezing.  We had about 6 inches of snow a week or so ago.  That’s a bit early for us, although we usually have snow right around Halloween.  Then, it was cloudy and foggy for an entire week, which is REALLY unusual for Calgary.  We’re so dry, we rarely get fog, and we usually have lots of sun in the winter.    But, the fog has lifted, the sun is shining, and I have an extra hour today!  What could be better!
Posted by Colleen at 10:59 2 comments: