Every year at the end of May, Calgary's Heritage Park hosts the Festival of Quilts.

Heritage Park is a historical village, set in what is one of the most beautiful locations in the city. 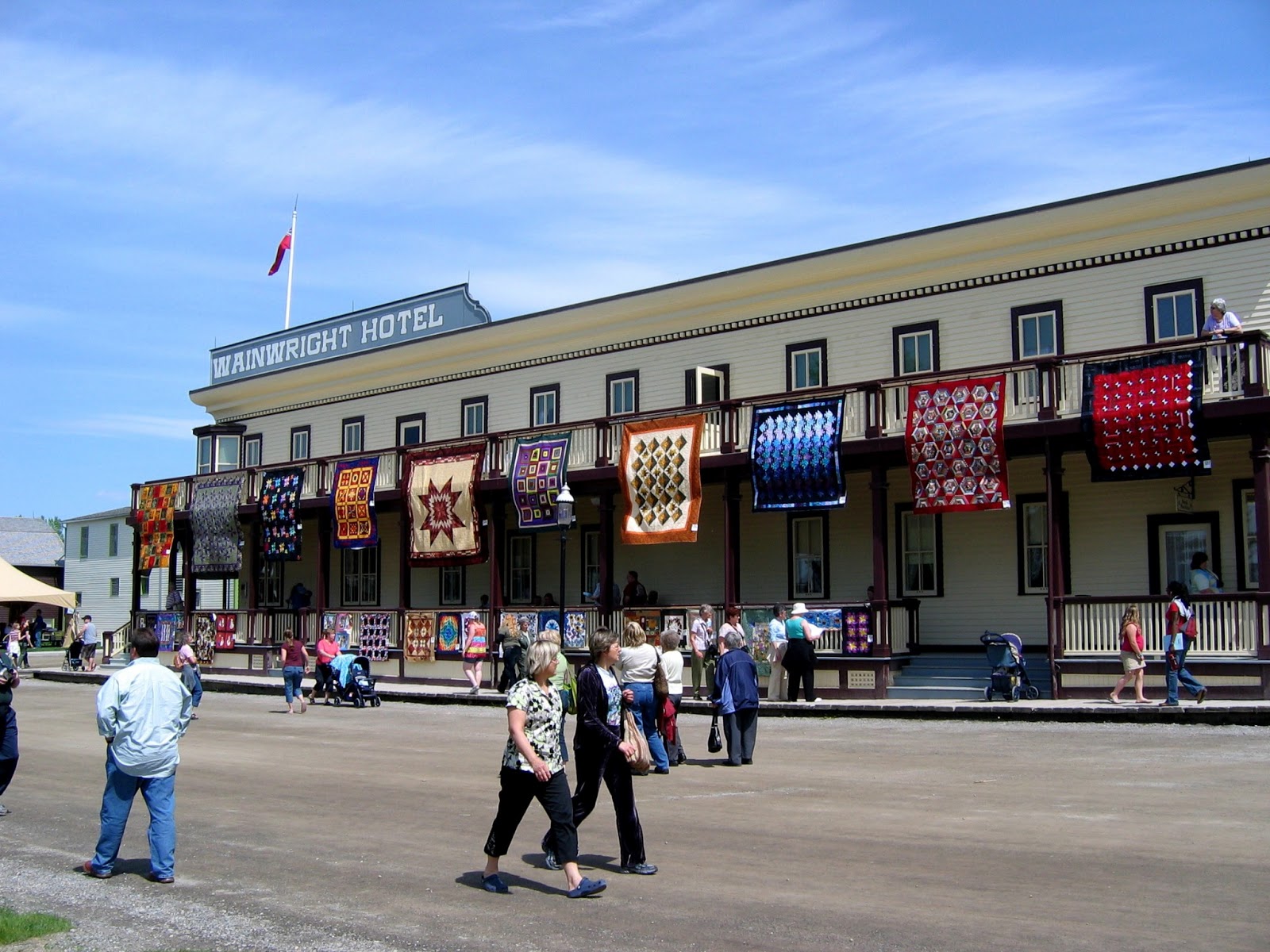 This photo is from a few years ago, and shows the Wainwright Hotel, with all the quilts.  They are also displayed in the houses, draped over fences, hung on clotheslines and hung under tents.  On a nice May day, it is a spectacular show! 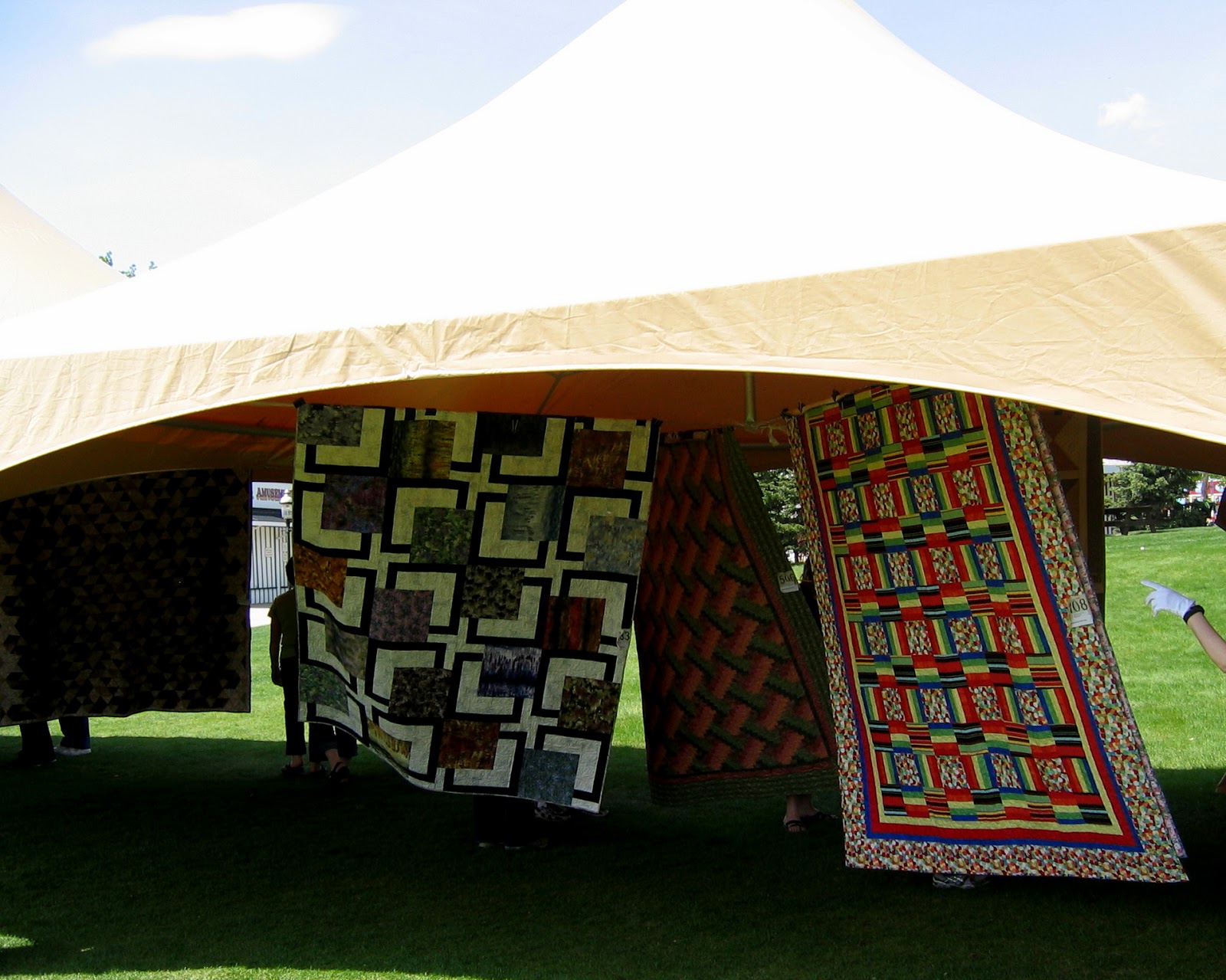 I haven't ever entered a quilt.  It isn't a judged show, but all the same, I didn't think my quilts were good enough.  But this year, I picked up an entry form, and noticed that this year, they have a special call for appliqué quilts.  And this year, I have this one: 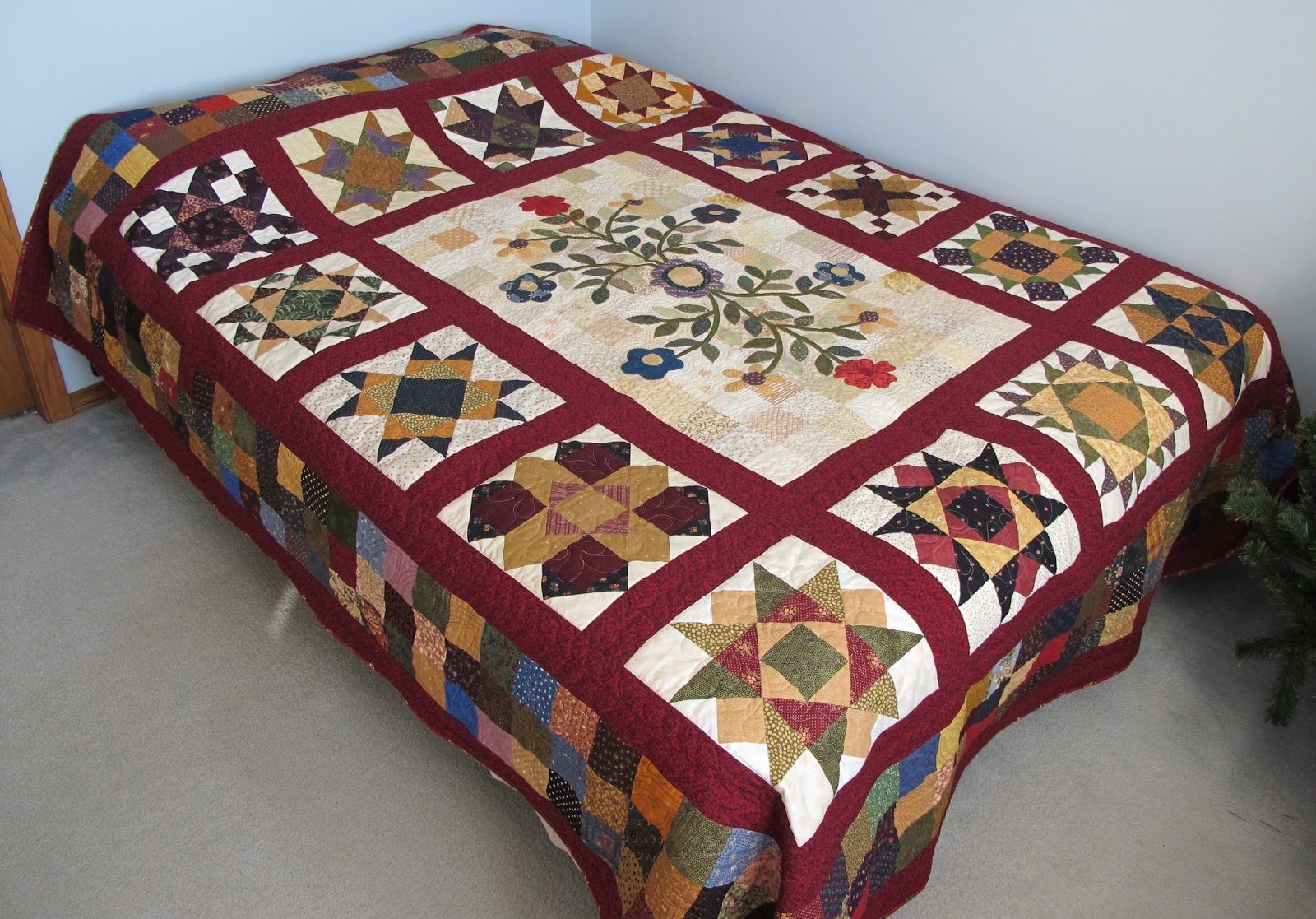 This is Stars Around the Garden.  I've shown you this before.  It was a Saturday Sampler, that was started a few years ago, and finished up last fall.   It was quilted by the wonderfully talented Chelsea at Pins and Bobbins. 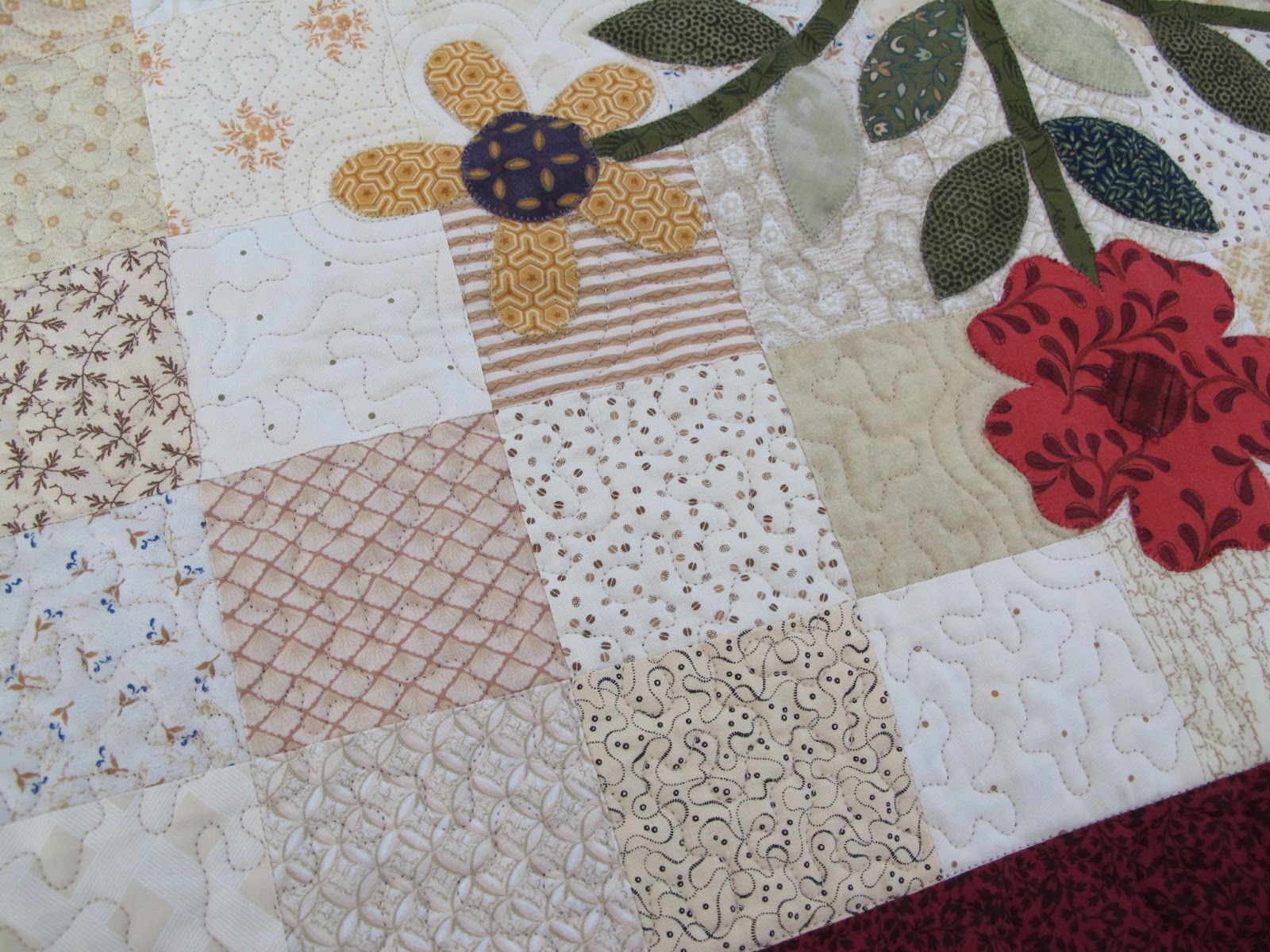 Linking up with The Needle and Thread Network

As promised, here are photos of the fabric I picked up yesterday at the Ujamaa Grandmas annual fabric and yarn sale. 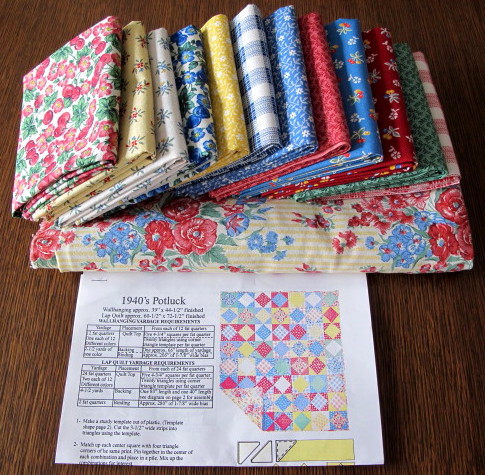 The ladies were very generous with their measuring.  This piece was marked as 1/2 metre.  It had been cut into, but the uncut part was 3/4 of a metre, and the part that was cut into left at least a fat quarter. 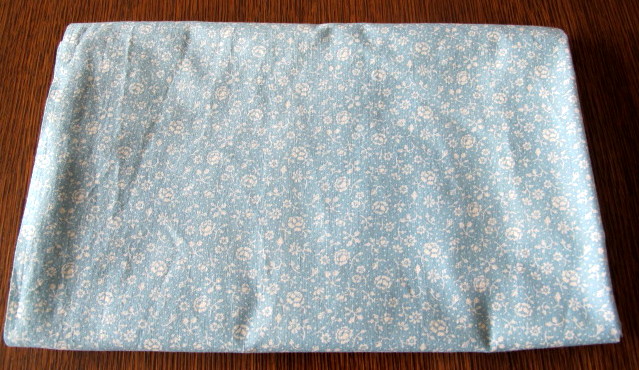 This piece was marked as 3.5 metres.  It was actually 5.  I have a Christmas quilt in the planning stage that can use this as a backing. 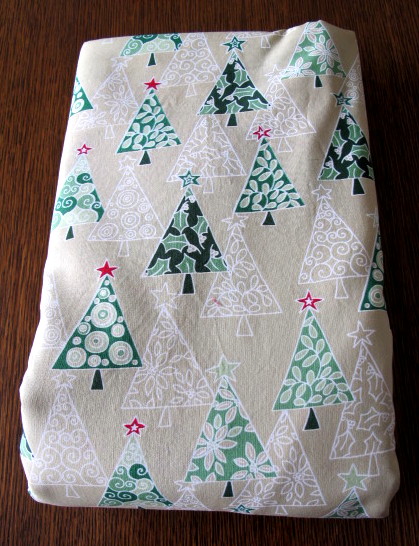 And then there were scraps of various sizes that were bundled together in coordinating packages.  Each package totalled about a metre, and was $3.  I got 4. 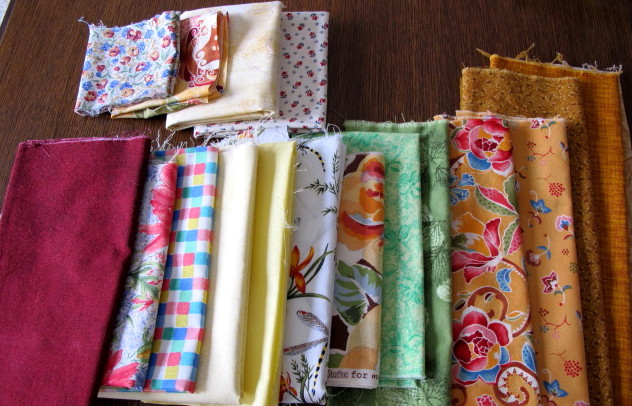 And finally, a "grab bag" for a dollar.  These fabrics were mostly non-cotton, although there were a couple muslin pieces in there.  These will be good for practising free motion quilting.

I'm on the Grandmas mailing list, and received an e mail from them today, saying they made $28,500 from the sale yesterday.  I'm impressed!

I'm linking up with Sew Sunday, even though I haven't done any actual sewing yet today.  I have done a lot of preparing, and thinking about sewing and I've decided that counts.

Email ThisBlogThis!Share to TwitterShare to FacebookShare to Pinterest
Labels: Shopping

Strategies of a Fabric Sale Shopper

Ujamaa Grandmas is a non-profit society that raises money to help grandmothers in Africa who are raising their orphaned grandchildren.  Their big fundraiser of the year is their fabric and yarn sale in April.  I discovered it 4 years ago.  It seems to be getting more popular every year.

People donate their un-used fabric, yarn, notions, books, patterns, etc to the Grandmas.  They also get donations from fabric and upholstery stores in town.

The first year I went, I arrive at around 11:00.  The sale is held in the basement of a church.  I walked down the stairs and WOW! - I could not believe all the fabric that was there.  Tables stacked with piles and piles of one and two yard cuts of fashion and decorator fabric in the main room - and several side rooms with specialized items.  One room was full of quilting fabric, in various sizes.  Another was full of notions and tools.  A third had bolts of decorator fabric.  I was in heaven!  I stocked up, for just a few dollars.

The next year, I arrived right as it opened, at 9:30.  It was crazy busy!  It was hard to even get to the quilting fabric, but I managed to stock up again, and joined the huge lineup to pay.  I decided I wouldn't go right at opening time the next time.

Yesterday, my strategy was to arrive at about 10:00.  That way, I would miss the opening rush, but would still have a good selection.  I got there, and parked a couple blocks away, as there were cars all over the place.  That was not a good sign, but I assumed it was all the early birds, who were now in the process of leaving.  I turned the corner and arrived at the church to find a lineup well outside the door!  It turns out that people were lined up an hour before the doors opened!  This event is getting to be very popular!!

Well, what's a girl to do?  I joined the lineup, and shivered with all of the other women (and a couple men - or "sherpas" as one fellow described himself).  It took about a half hour just to get into the sale. And another 20 minutes in line to pay.   But, it was well worth it.  The selection of quilting fabric was the best yet.  I came away with a healthy haul.  I'm just washing it up right now, so I'll post pictures later.

My tips, for anyone who wants to go next year are:


More information about the event is here.
Posted by Colleen at 07:00 3 comments:

Email ThisBlogThis!Share to TwitterShare to FacebookShare to Pinterest
Labels: Shopping

The Second Half of the Story

So, I mentioned yesterday that I met up with Mary (Outside the Line) to collect my giveaway.  When we were discussing where to meet, she said that she was going to the Calgary Modern Quilt Guild meeting on Thursday, and would I like to meet her there?  That was a serendipitous question!

You see, I had been wanting to join a quilt guild for awhile, but for some reason, guilds in Calgary seem to be very hard to find.  (Try googling Calgary quilt guild - the only one with a webpage is the Modern Quilt Guild.)  There is a group that meets at my community centre - on Wednesday mornings.  That darn "making a living" thing prevents me from attending that group.  I had been thinking about the Modern Quilt Guild, but I wouldn't classify myself as a modern quilter.  I have made a couple modernish projects, and I love looking at them, but I also make traditional quilts.  I just like them all!

But, I took Mary up on her offer, and went with her to the Calgary Modern Quilt Guild meeting.  And met a group of fun, welcoming women.  They didn't give me a test to find out if I fit in their niche.  So, I do believe I will go back.

Now, today, I am off to Ujamaa Grandmas annual Fabric and Yarn sale - and I hope to come home with some fabric bargains!
Posted by Colleen at 09:05 1 comment:

Lucky me!  I won a giveaway at Outside the Line blog.  Mary was celebrating the end of her school year, and gave away two books and a mini quilt kit.

I won this book:

(Don't look inside - I just borrowed the image from Amazon.) 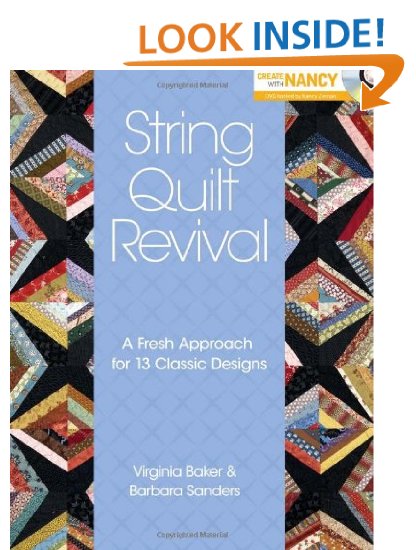 What a great book!  The quilts are very nice, the instructions look very clear and there are lots of photos.  There is also a Nancy Zieman DVD included, which demonstrates the technique.  I haven't cracked that open yet.  This book should help me put a dent in my scraps!

The second lucky thing that happened, is that Mary and I discovered that we don't live all that far apart from each other.  So, I got to meet her in person.  That was fun, and a story for another blog post.
Posted by Colleen at 19:09 1 comment: 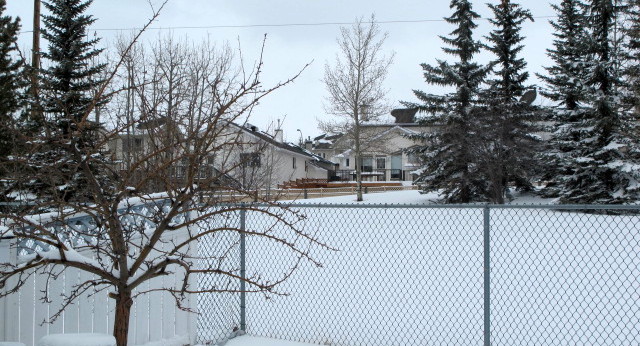 When it's springtime in Alberta,
And the gentle breezes blow
About seventy miles an hour
And it's fifty-two below.
You can tell you're in Alberta
'cause the snow's up to your butt
And you take a breath of springtime air
And your nose holes both freeze shut.
The weather here is wonderful
So I guess I'll hang around
I could never leave Alberta
My feet are frozen to the ground! 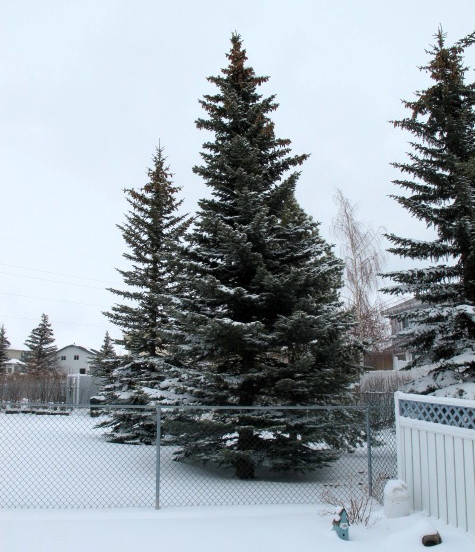 Yes, this is the lovely weather I am looking at outside my windows today. Yikes!  In Calgary, we don't say "April showers bring May flowers".  It is April snow, and sometimes May snow, then June showers and the flowers don't really arrive until July.  Then, we have a good frost at the end of August, and gardening season is over.  Do you wonder why I quilt rather than garden?

I haven't decided what I'll work on, but I'm wandering down to my sewing room right now, and I should be able to keep myself entertained (and warm) for the afternoon.

Linking up with Sew Sunday with Fairly Merry. 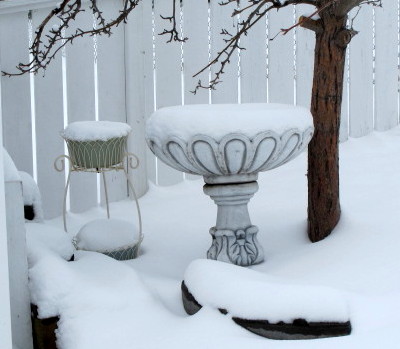 After my complete FAIL last quarter (when I only had two goals), I've decided to list more goals this quarter, in the hopes that something will pique my interest enough to get finished.

Goal Number One:
Of course, it has to be Sand and Sea Glass. 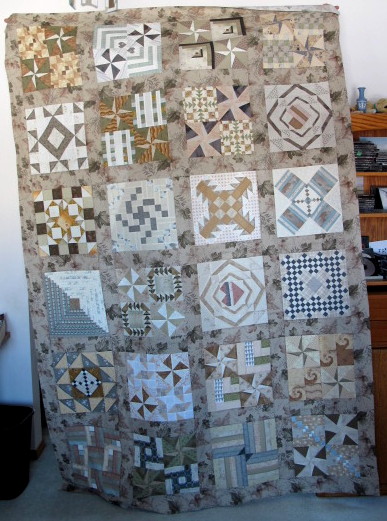 This one is soooo close to being done.  I've got the sashing and borders quilted, and have to figure out decide how to quilt the blocks. 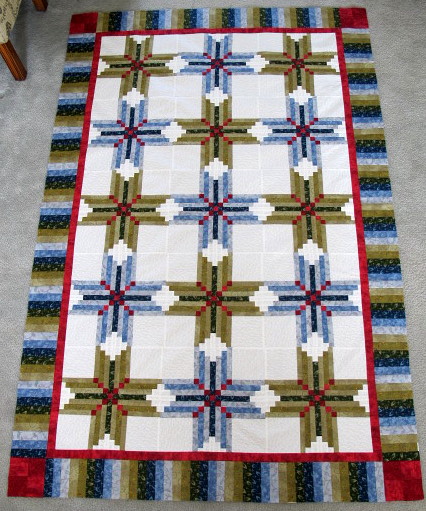 It has to be quilted - but I actually have some ideas about how I want to do it.  Surprise! 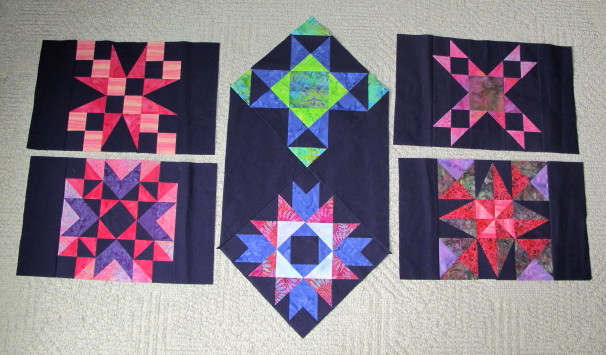 I dug these out from where I stashed them away when I didn't want to work on them last quarter.  They just need to be quilted.  (I think I'm detecting a pattern here!)

Goal Number Four
This is a new one.   I've had the fabric and pattern for this quilt for several years.  It is called Maple Sugar. 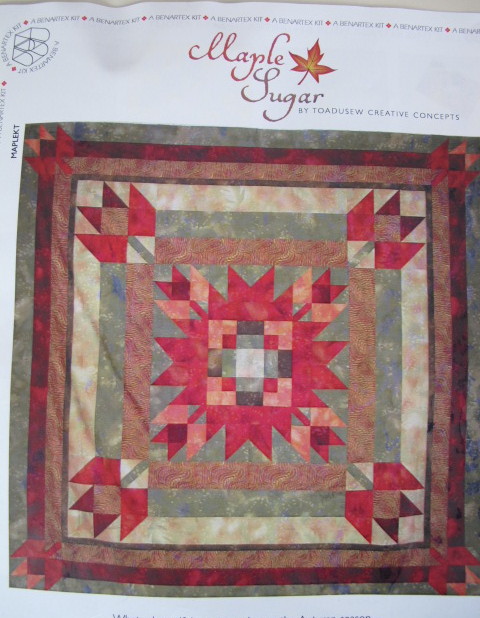 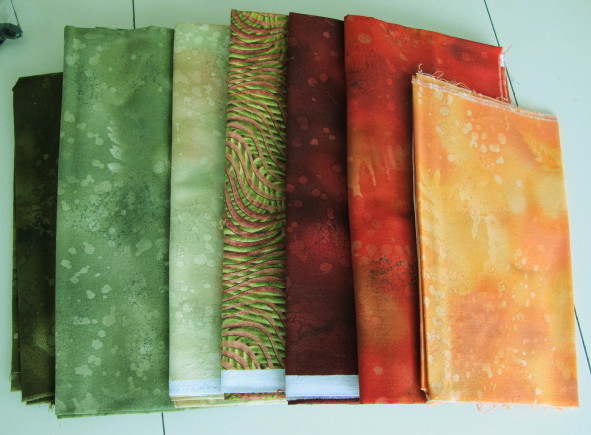 The pattern is by Toadusew. The photo doesn't do it justice - it is striking!  I don't know why I haven't jumped into this project before.

Goal Number Five:
No photos yet, but I've started stitching together a baby quilt using charm squares.  Weeks Ringle had a simple pattern in this month's American Patchwork and Quilting.  (You can see it here.  I don't know if it is appropriate for me to copy their photo.)  She didn't use charm squares, but it seems easy enough to modify. (Famous last words?)  I'm using brights - eye spy type charms.

So, five goals to get working on.   I'd better get on it!

Linking up to She Can Quilt for the Finish A Long.
Posted by Colleen at 19:48 2 comments:

I thought I would keep it simple.  When I set my first quarter goals here, I only listed two.  I thought that if I didn't make the challenge too hard, I would be able to accomplish the goals.

How did that work out for you , Colleen?

Goal 1 was to make placemats and a table runner out of these blocks. 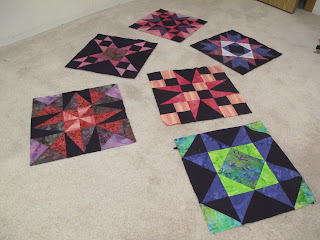 Guess what?  They are still all piled up at the side of my sewing table.  I think I sewed some side pieces on some of them, but it's been so long since I've looked at them, I've forgotten.

Goal 2 was to finish up Sand and Sea Glass. 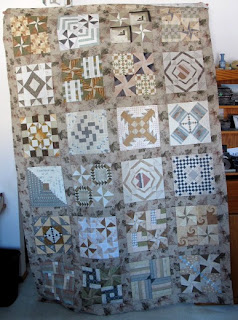 I did make more progress on this one.  I completed the top, and I've got it about 1/3 quilted.  So, it should be an easy finish for next quarter.

So, I can't link up at She Can Quilt, since I have no finishes - but I will play again next quarter, and I'm sure I'll be more successful then!

But, I can link up with WIP Wednesday, as I definitely have some WIP's.