Saturday morning dawned bright and warm for this year's Festival of Quilts at Heritage Park in Calgary.  It is not always this nice for this annual event on the last weekend of May.  I have seen it snow, and it often rains. But this year, we only got a bit of a shower Saturday afternoon, and lots of sun in the morning!

As we entered the park, we could see quilts hanging under tents and (yay!) the Vendor Tent over on the left! 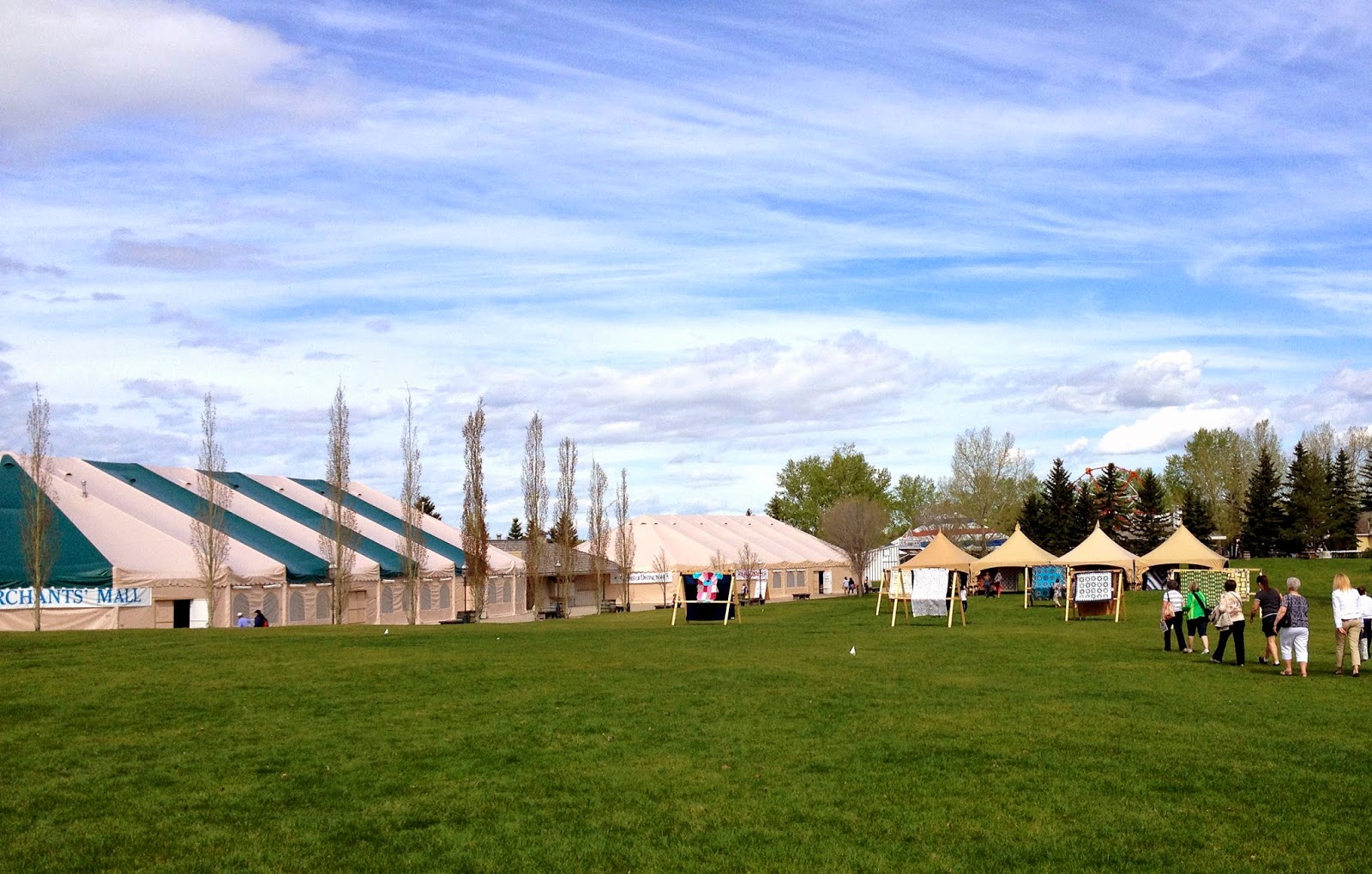 I only took a few pictures this year. There were about 800 quilts on display, and I wanted to enjoy them in person, rather than through photos.

I thought these two quilts were stunning! 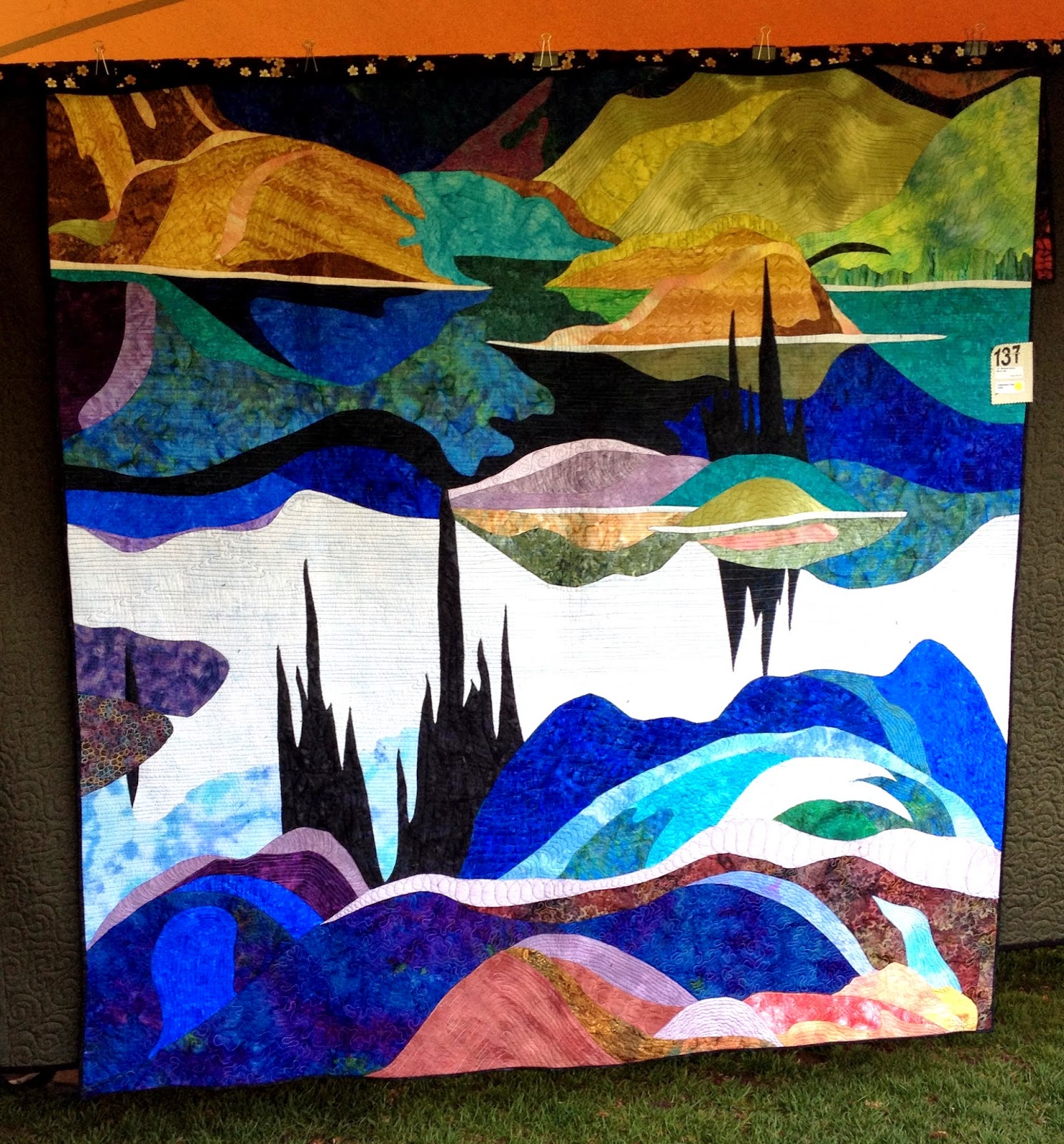 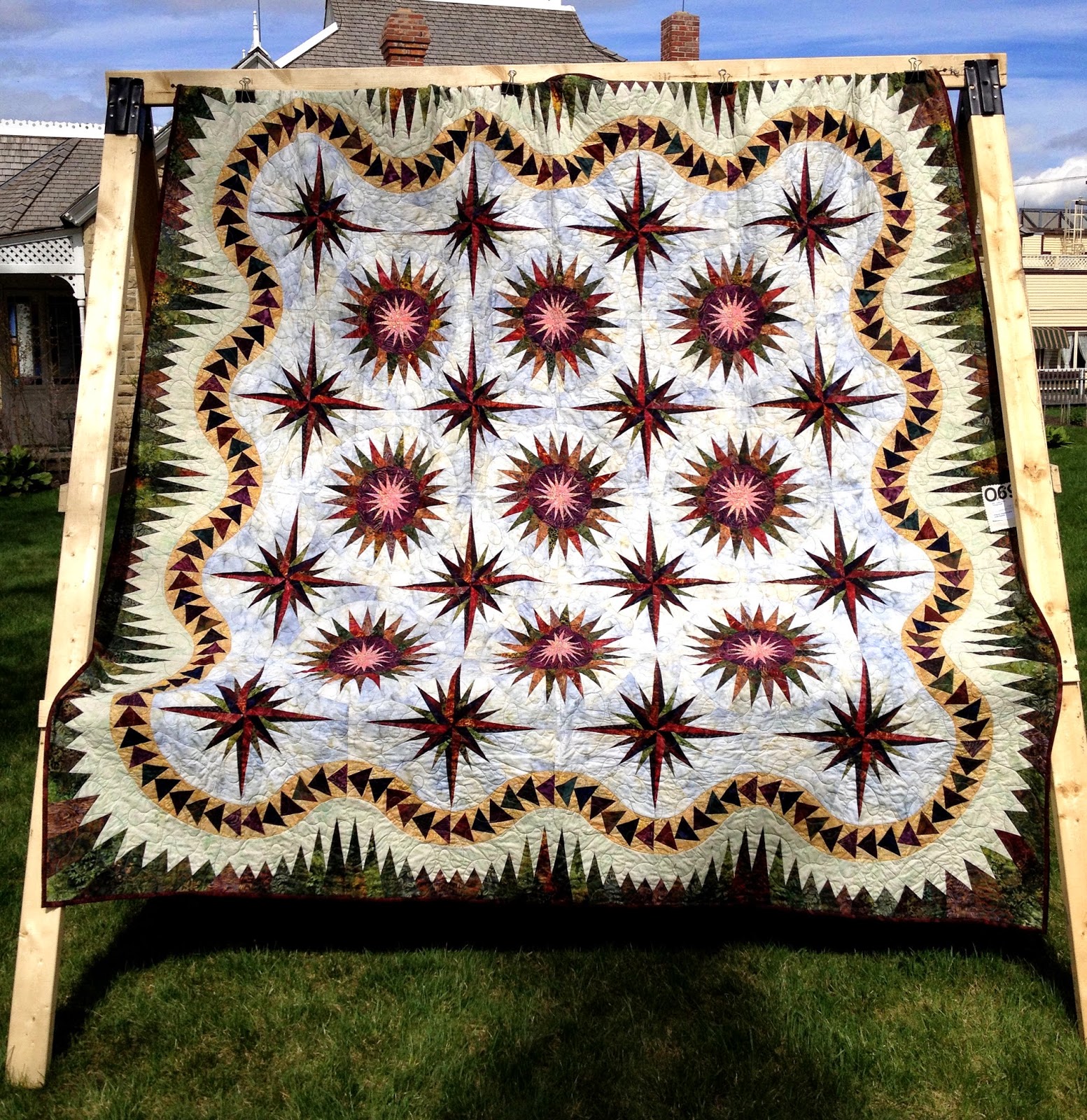 The was the one of the old houses, with quilts hanging on the porch. 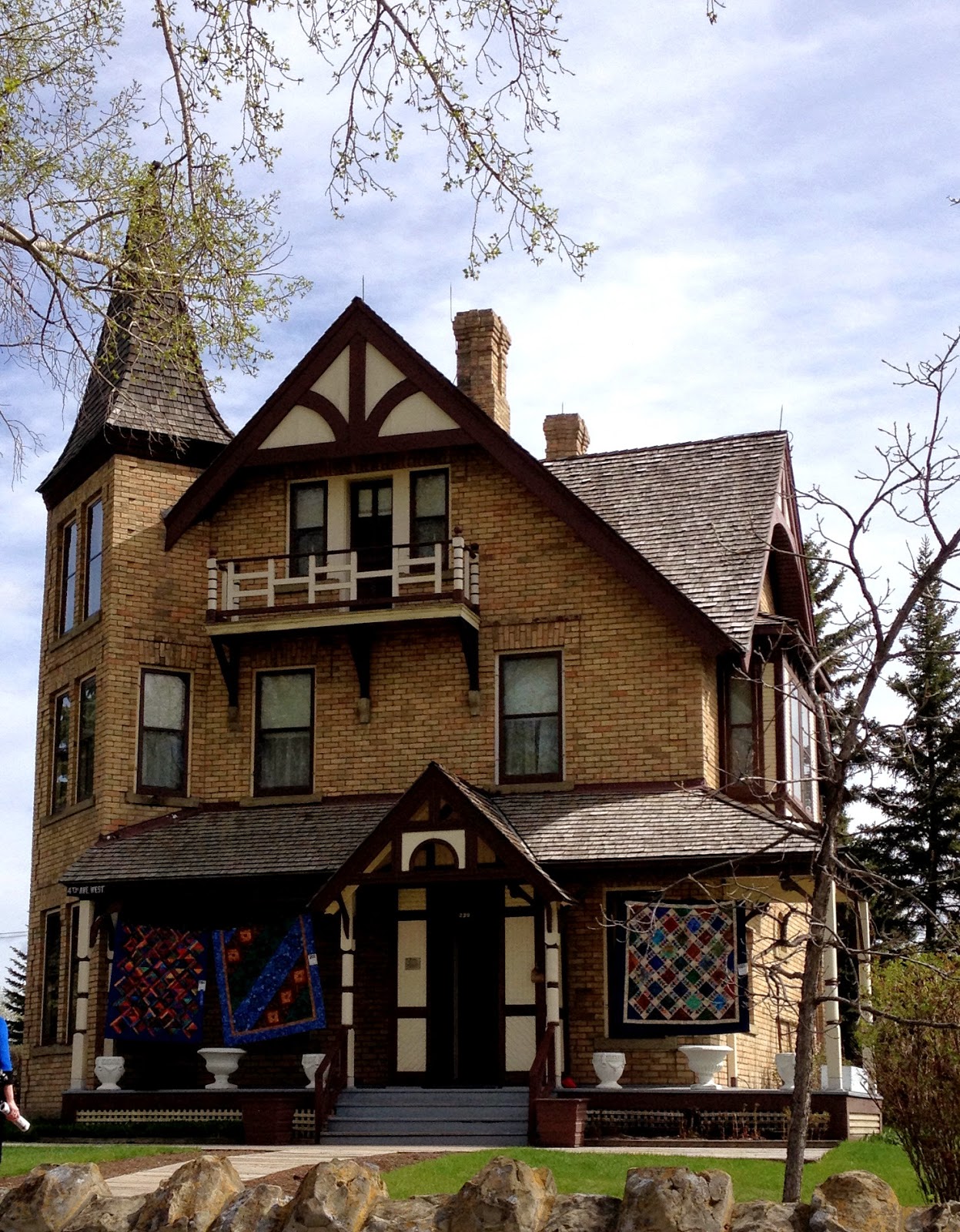 The Wainwright Hotel, covered with the large bedquilts. 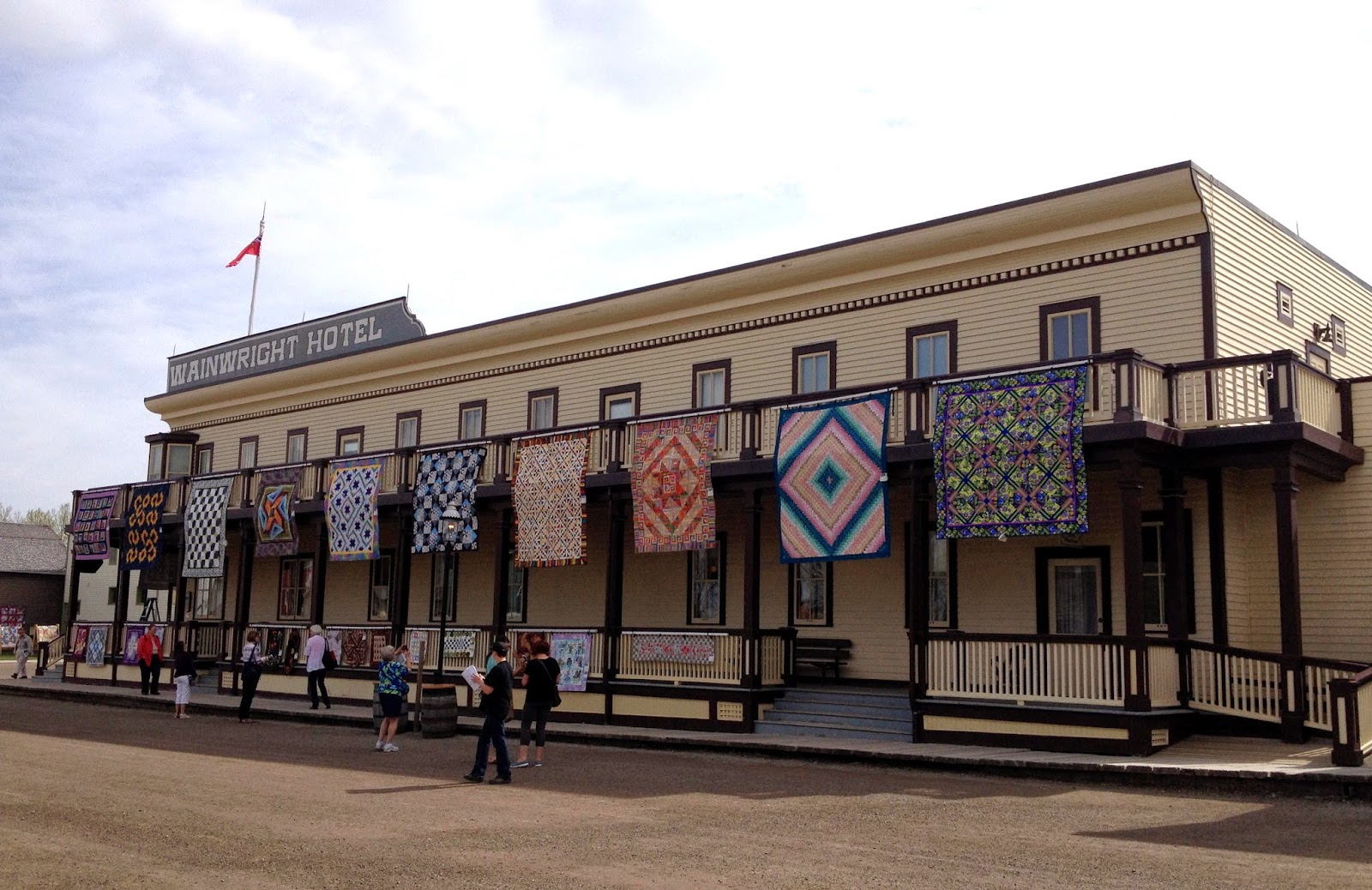 The woman who designed this fabric gave a talk to our guild about her history and design process.  (I can't remember her name!)  But it was fun to find a quilt using her fabric. 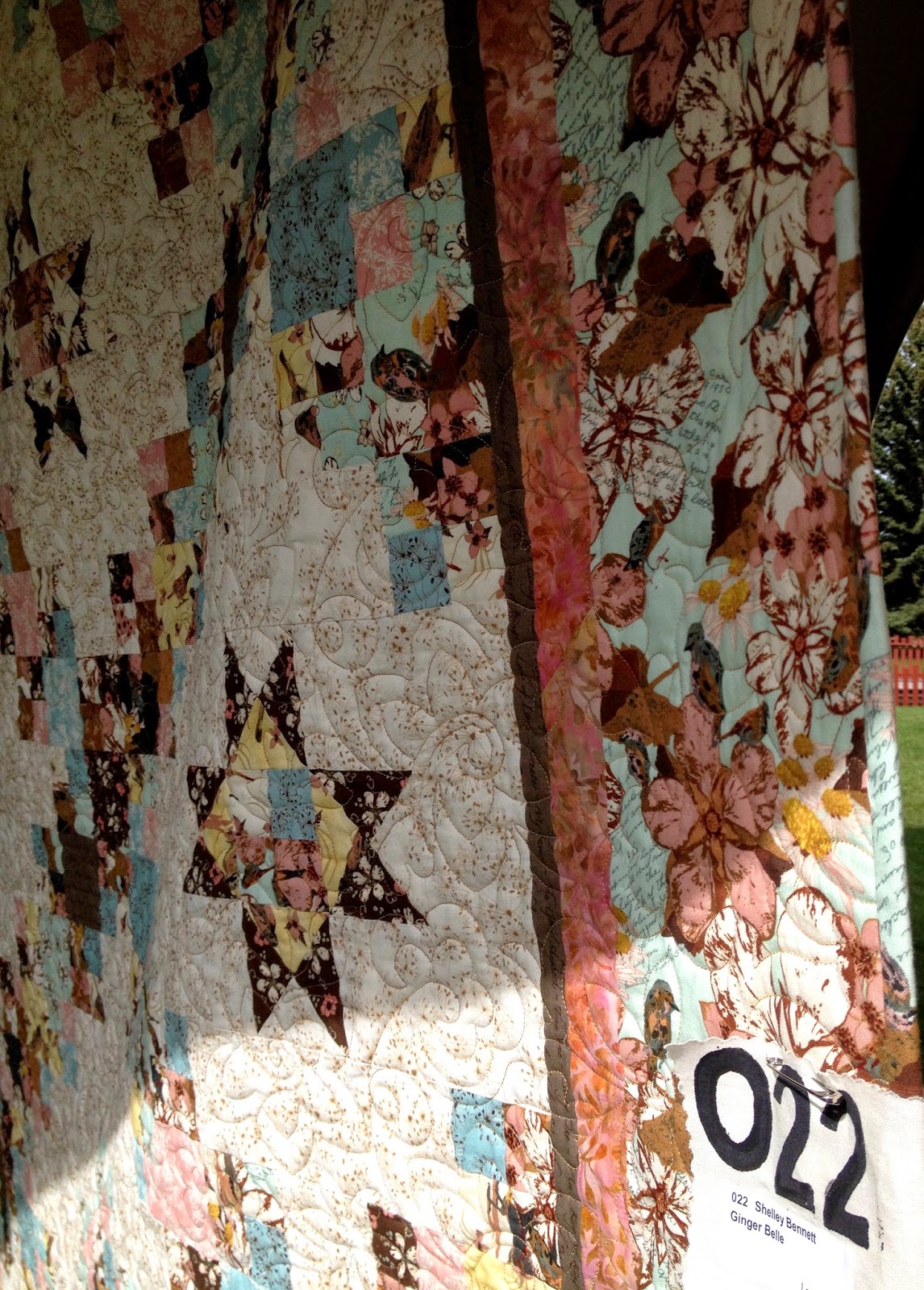 This was a beautiful whole cloth quilt.  You can see in the closeup that the mosquitoes were out in full force and seemed to like the white! 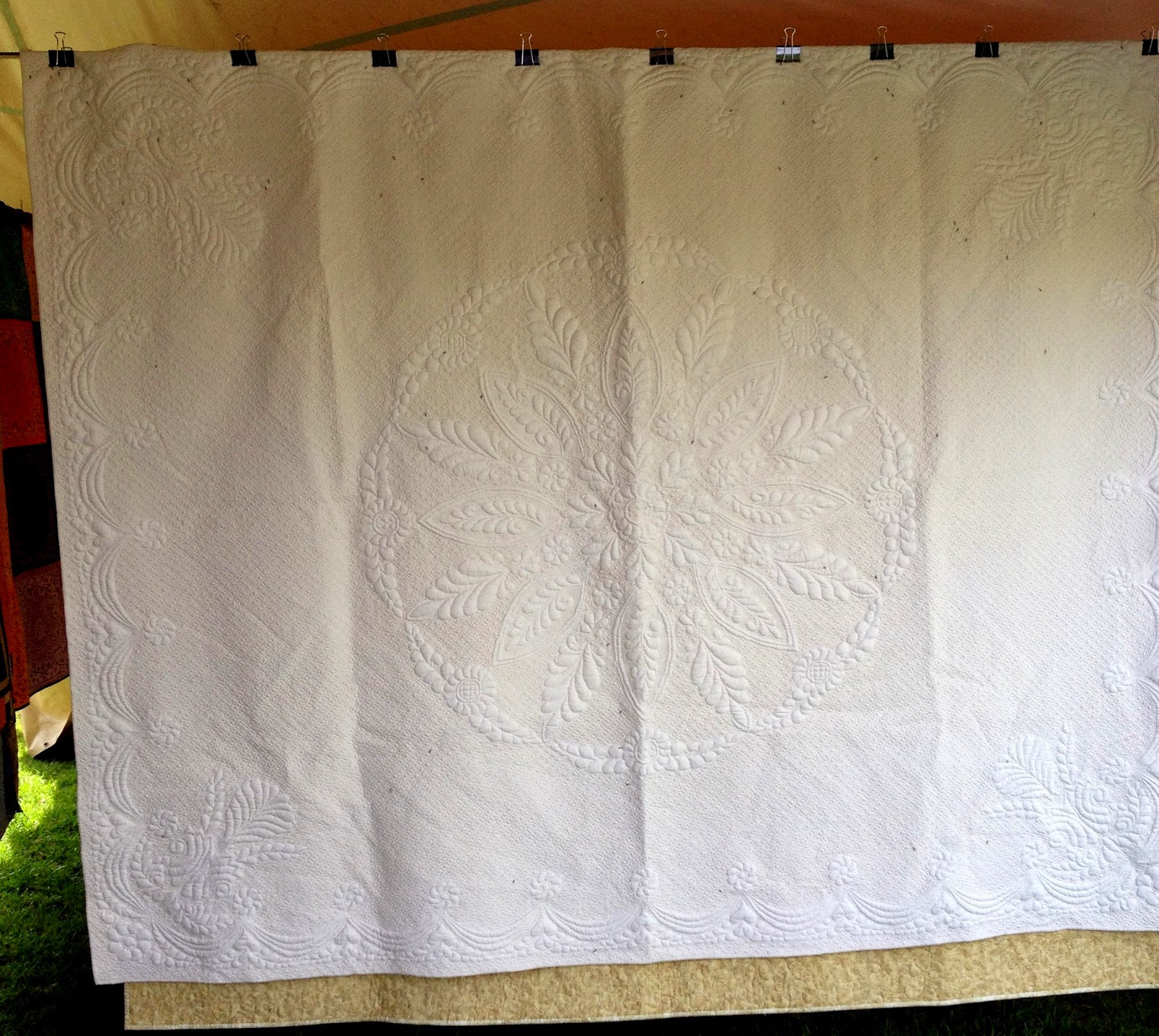 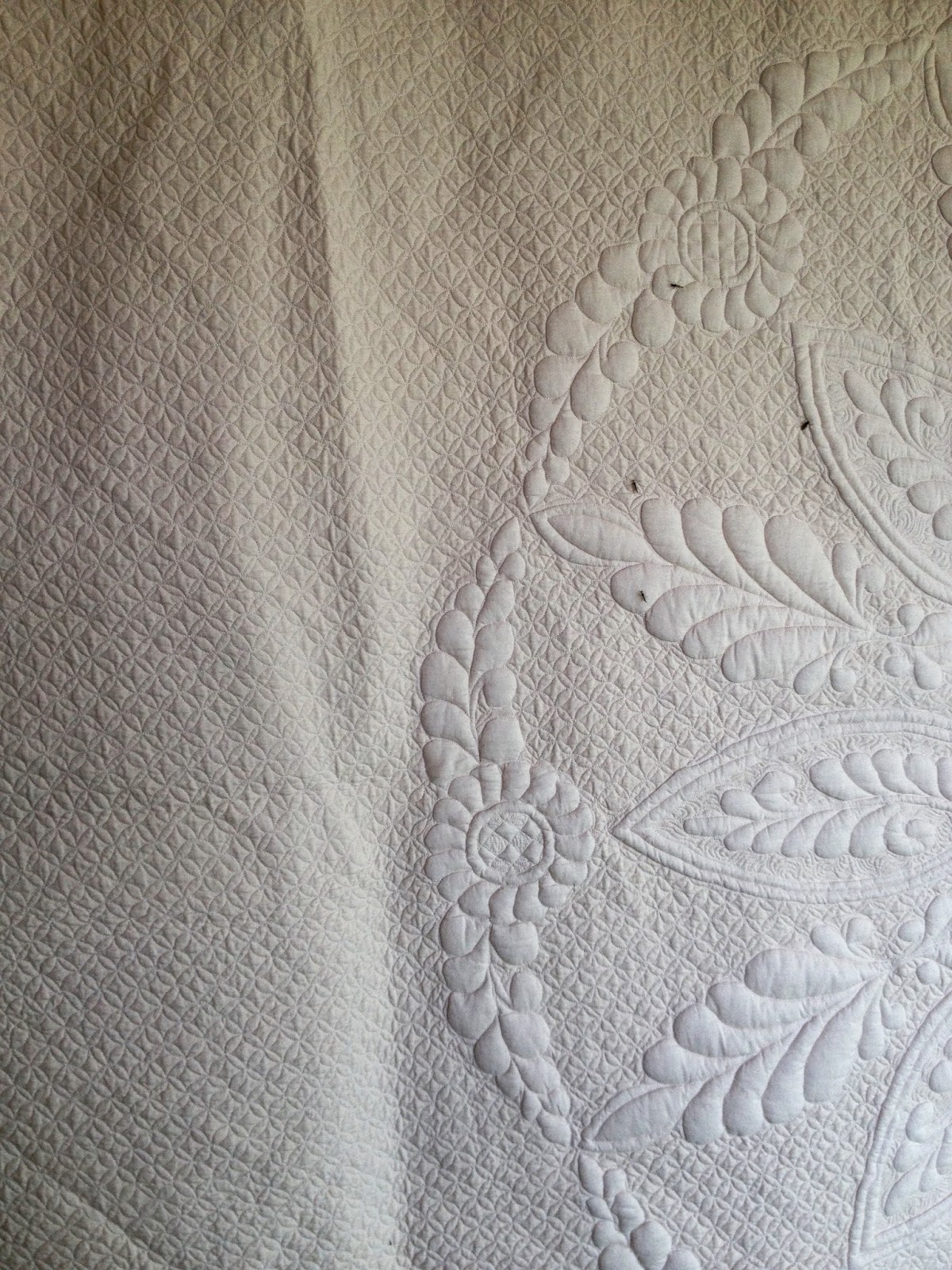 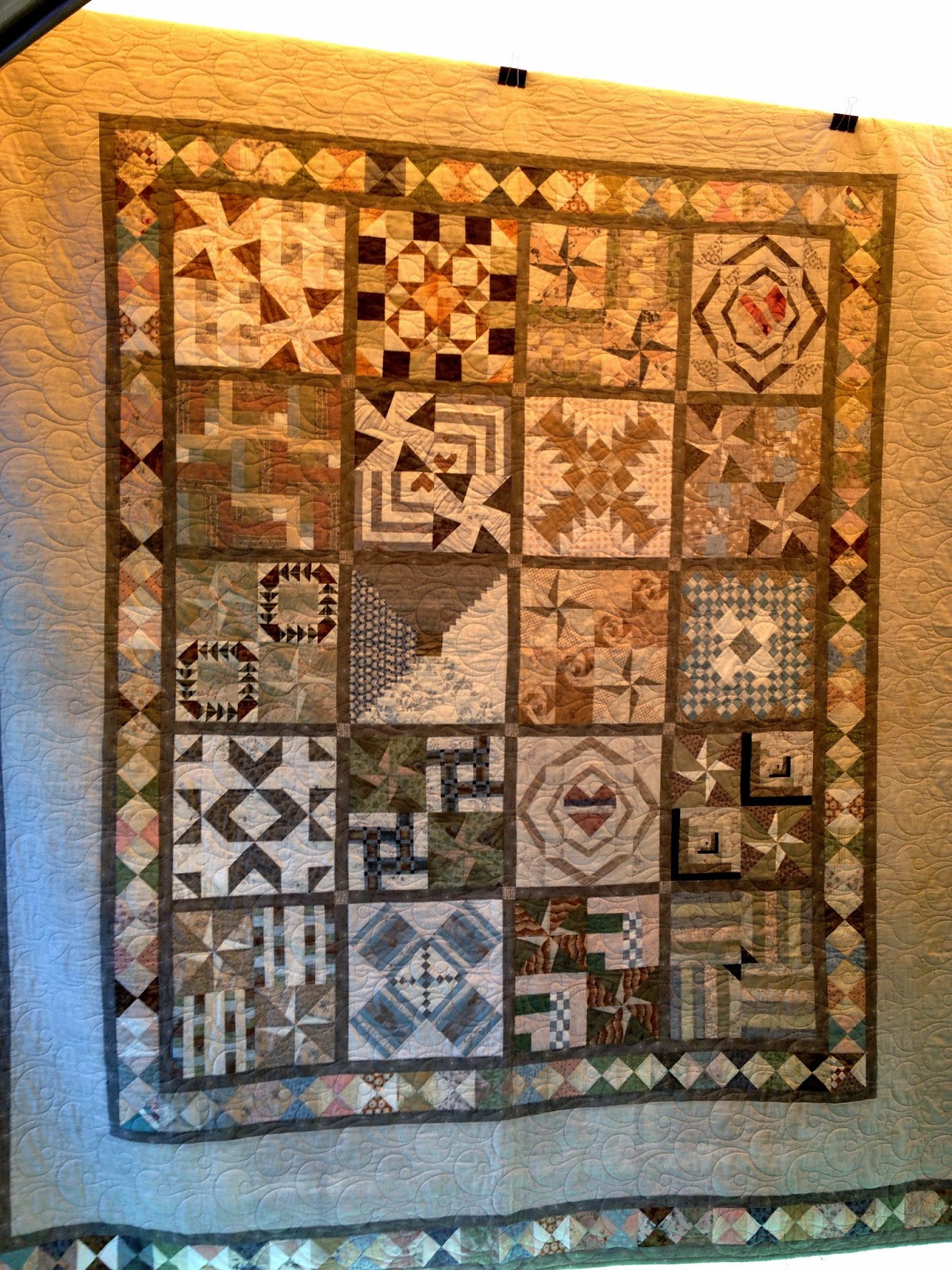 These four critters were adorable!  The penguin was done by Mary Dylke of our guild. 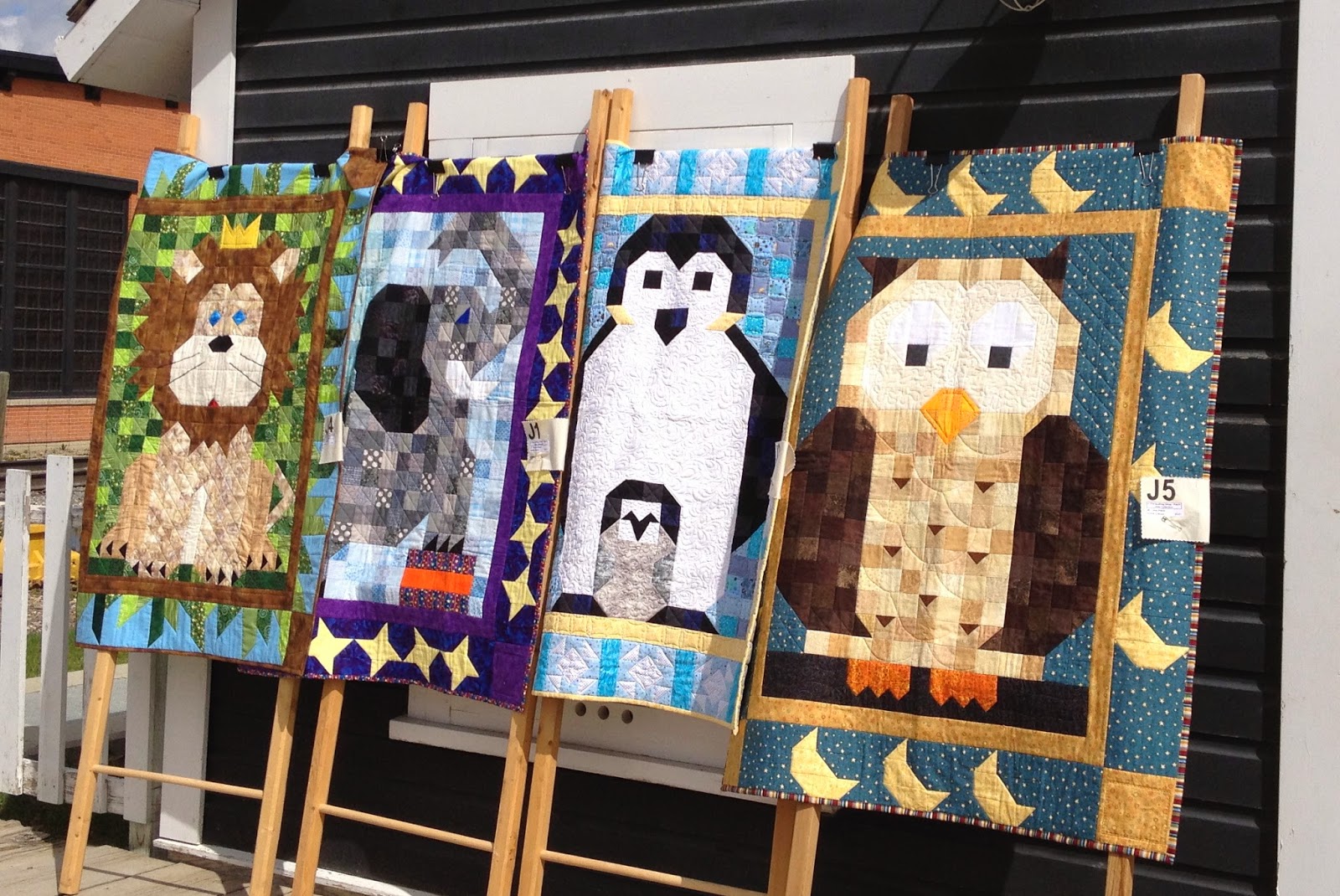 These last photos were of one of those in the modern quilt display (draped over vintage cars).  The quilting on this quilt was just amazing!! 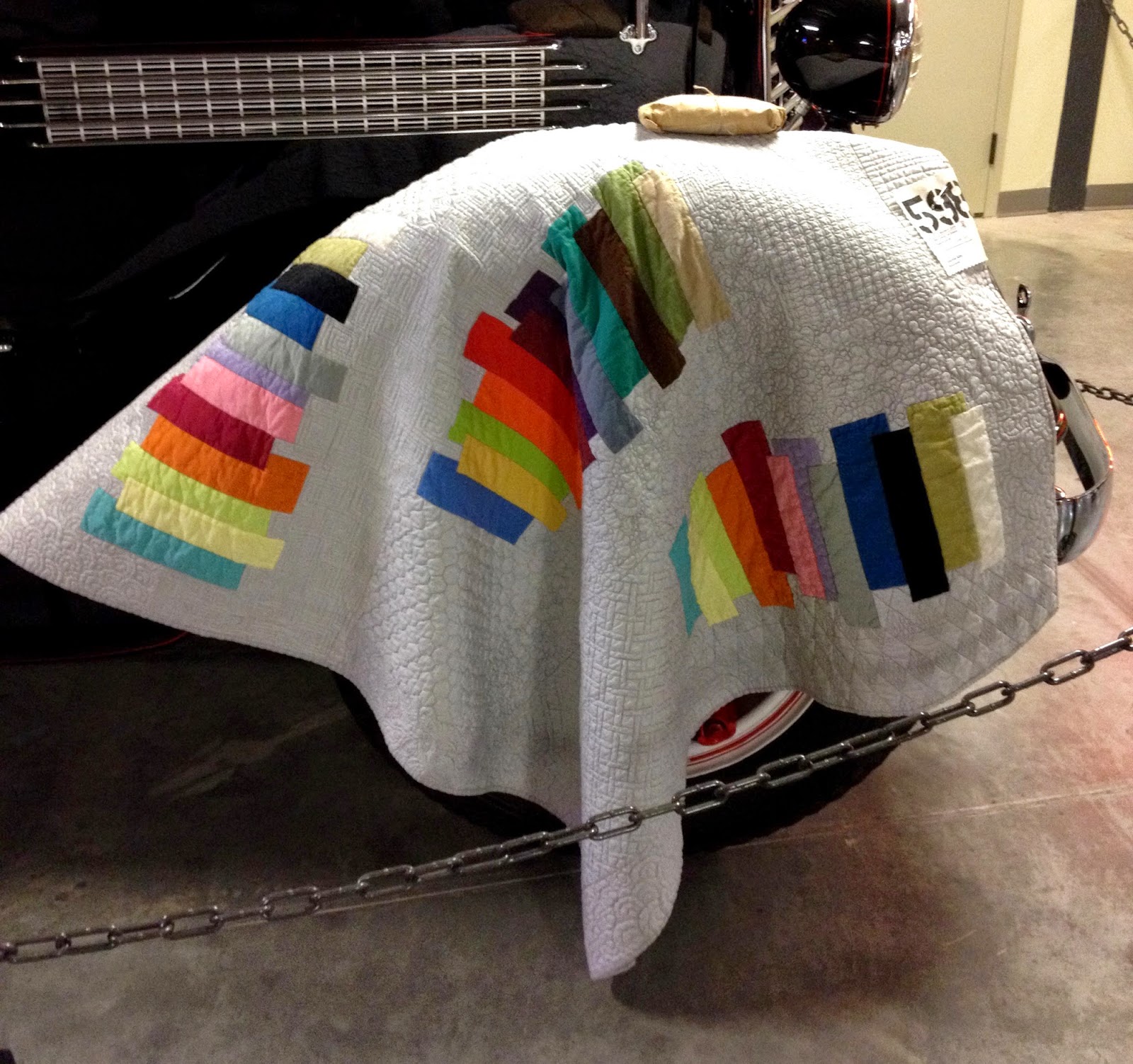 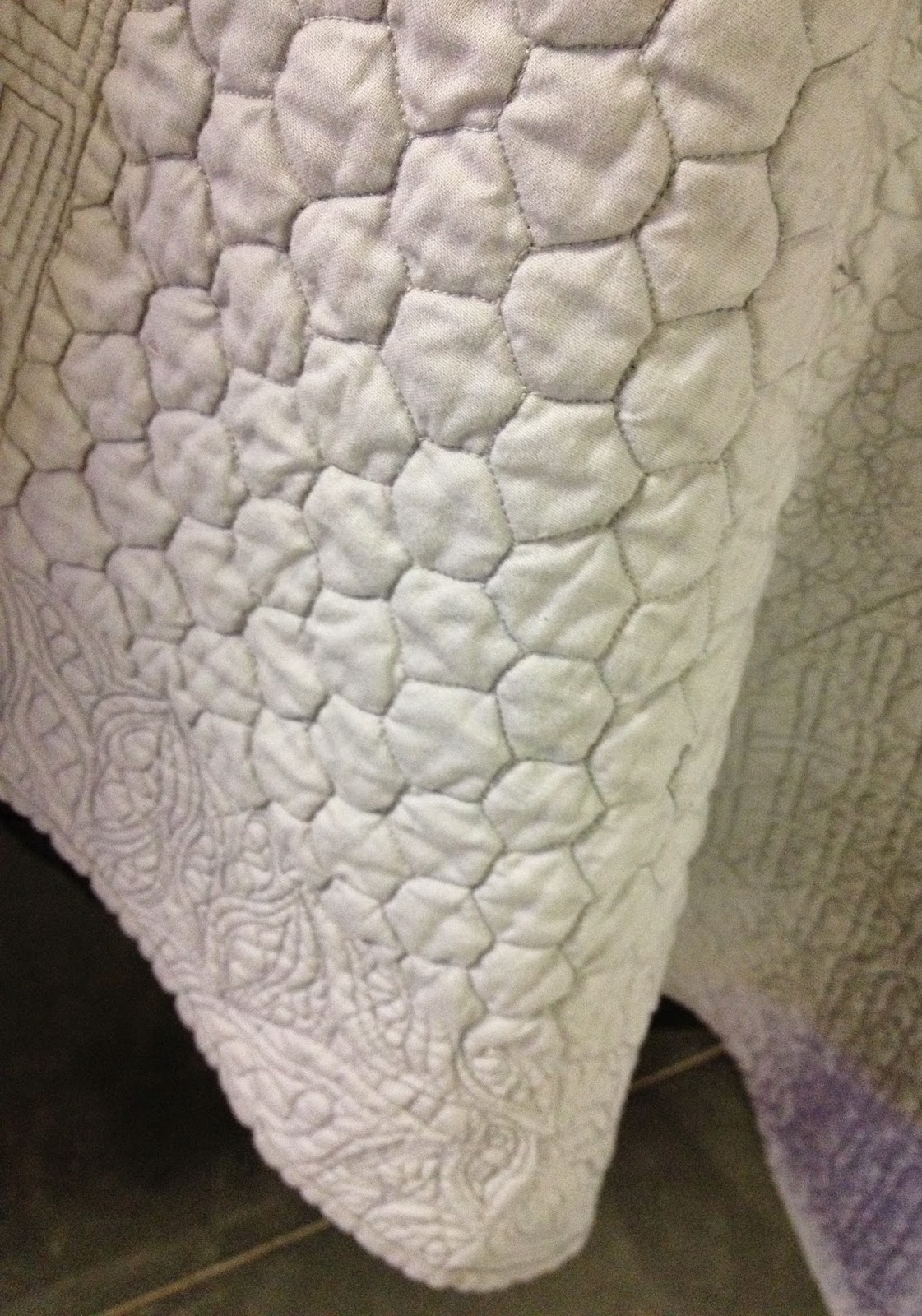 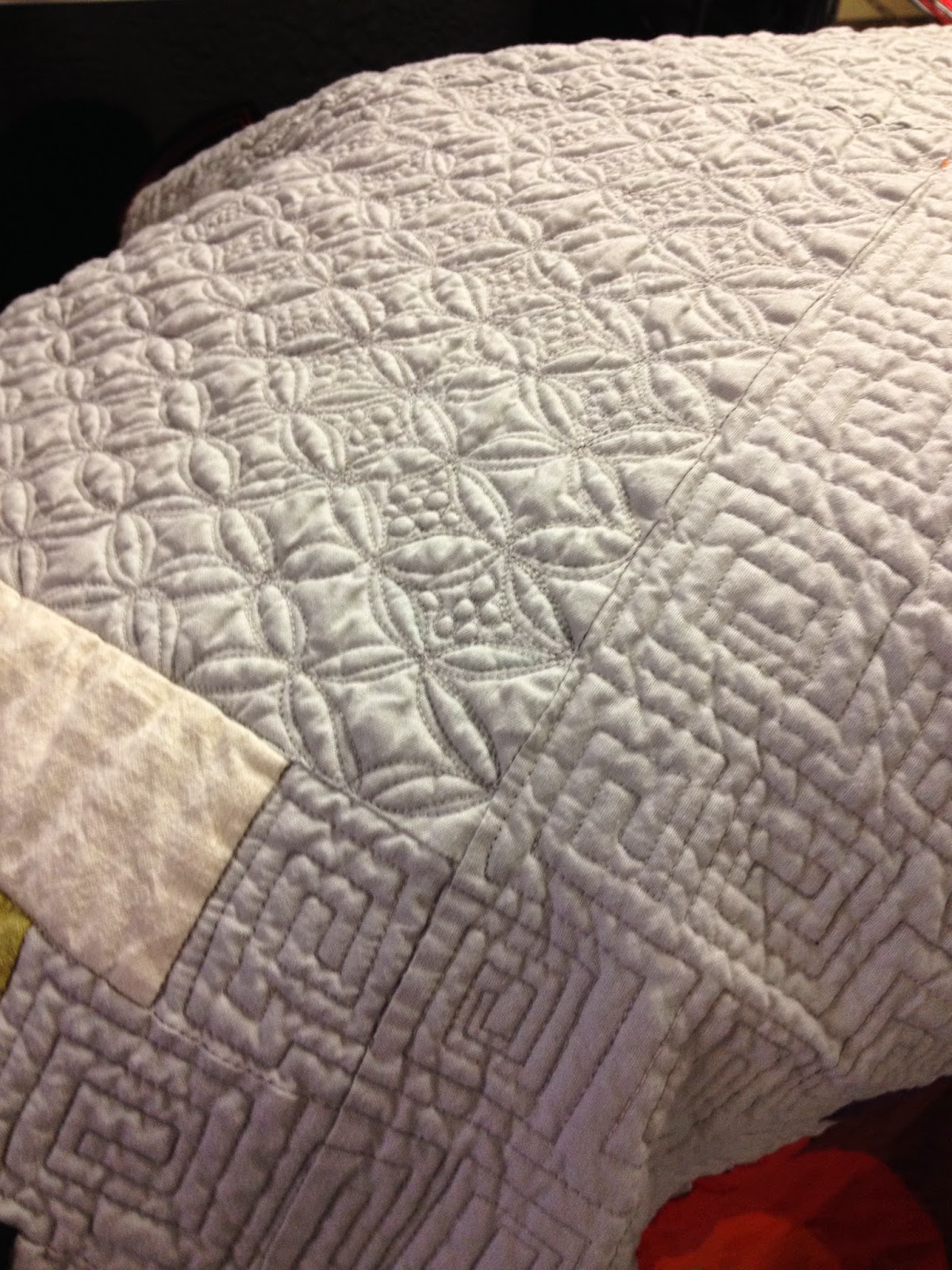 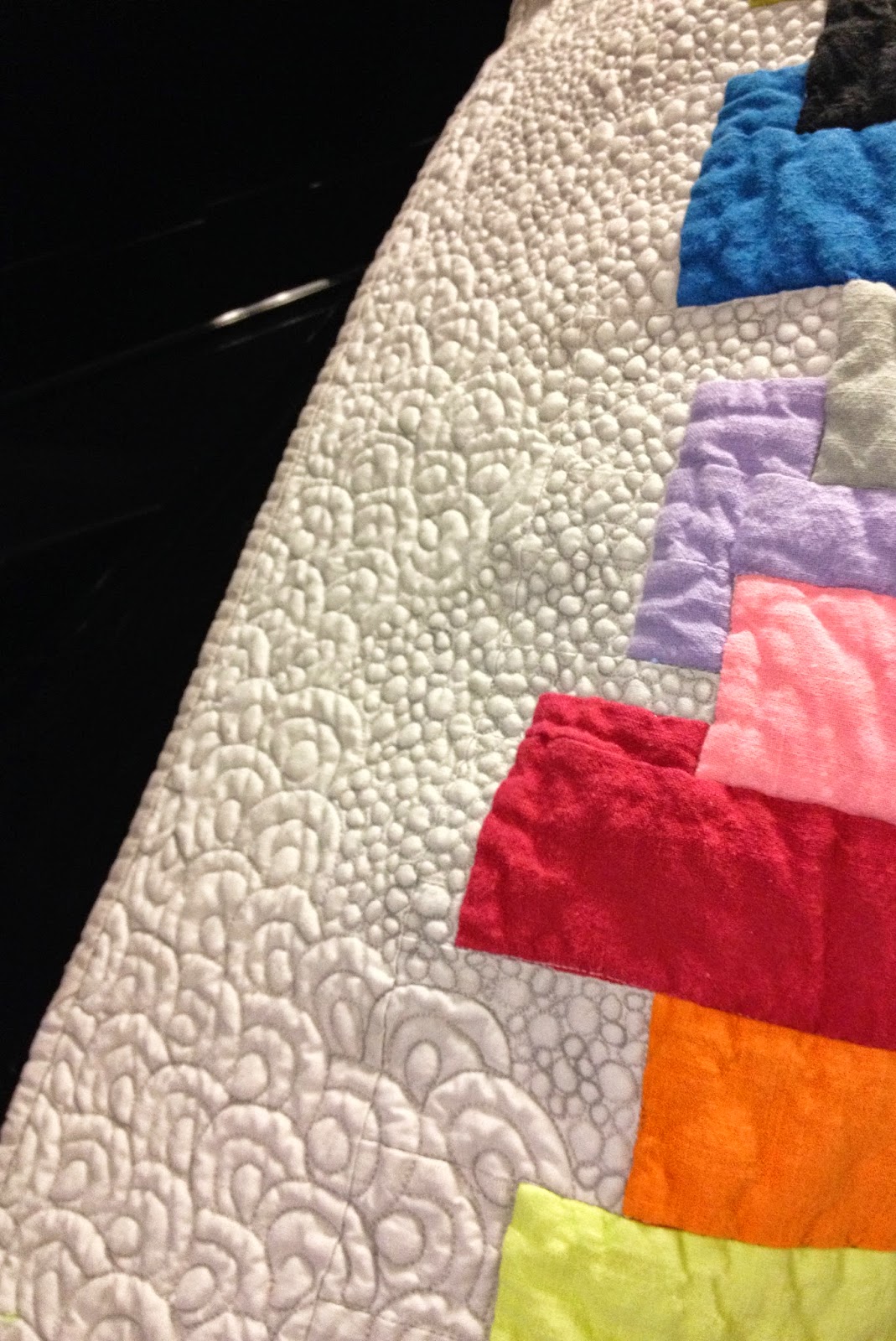 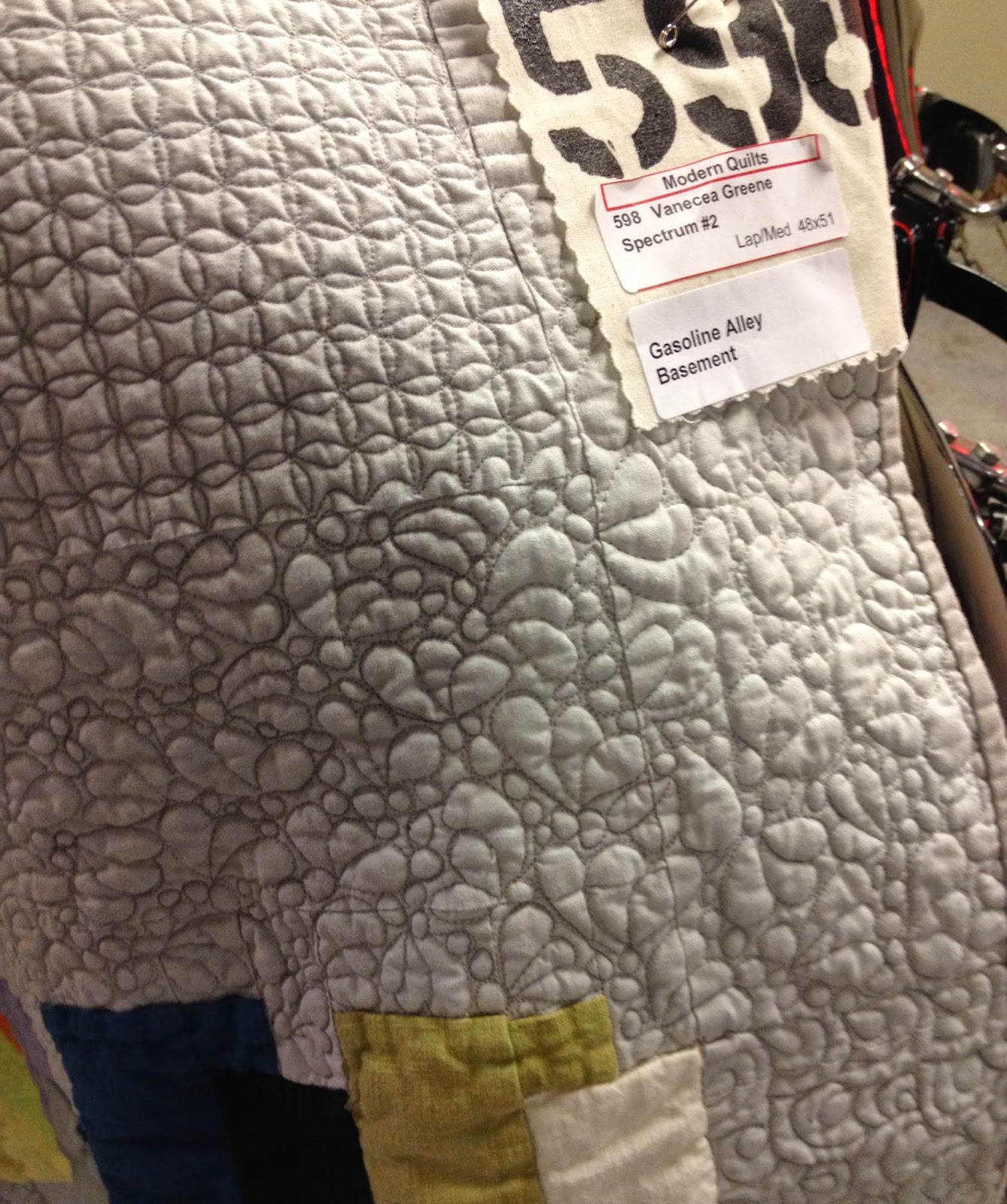 I didn't do too much damage to my charge card while I was there - despite some great bargains!  I did buy one jelly roll.  I recently won a Carolyn Friedlander pattern from Stephanie, at  Modern Sewciety. I chose the Sunrise pattern.  It can be made with a jelly roll, so I thought I had better be prepared for its arrival!
Posted by Colleen at 19:29 1 comment:

Not a Lot of Quilting Going On

Over the winter, we did some fairly major renovations to our house.  It started relatively small.  Mr. CQT discovered that the piping used for plumbing in our house was prone to leaks.  We've had a couple wet spots on the ceiling of the main floor, and decided it was time to replace that.  Mr. CQT is pretty handy, so he figured out how to locate the piping behind the walls and ceiling, so as to cut out as little as possible.

But, when we started talking about it, I mentioned how I really hated the popcorn ceiling and would like to have it replaced with knockdown - and since we're cutting holes in it anyway, now would be a good time to do that.

And then we started talking about how worn the master bathroom was... and before you know it, we decided to renovate the bathroom.

And then we started talking about the carpet - it was 20 years old and looking shabby. (We should have realized that we needed to stop talking, but no....)

Oh, and that gas fireplace in the family room that never worked - might as well replace that too, while the carpet was torn up.

Some major work was done, mostly by contractors, but we did the painting (and painting, and painting). We also replaced light fixtures (who knew brass was no longer in style!)

Mr. CQT was an expeditor before he retired - he worked on oilfield construction, making sure that items and trades were there when they needed to be.  Those skills really came in handy!

Here is the bathroom: 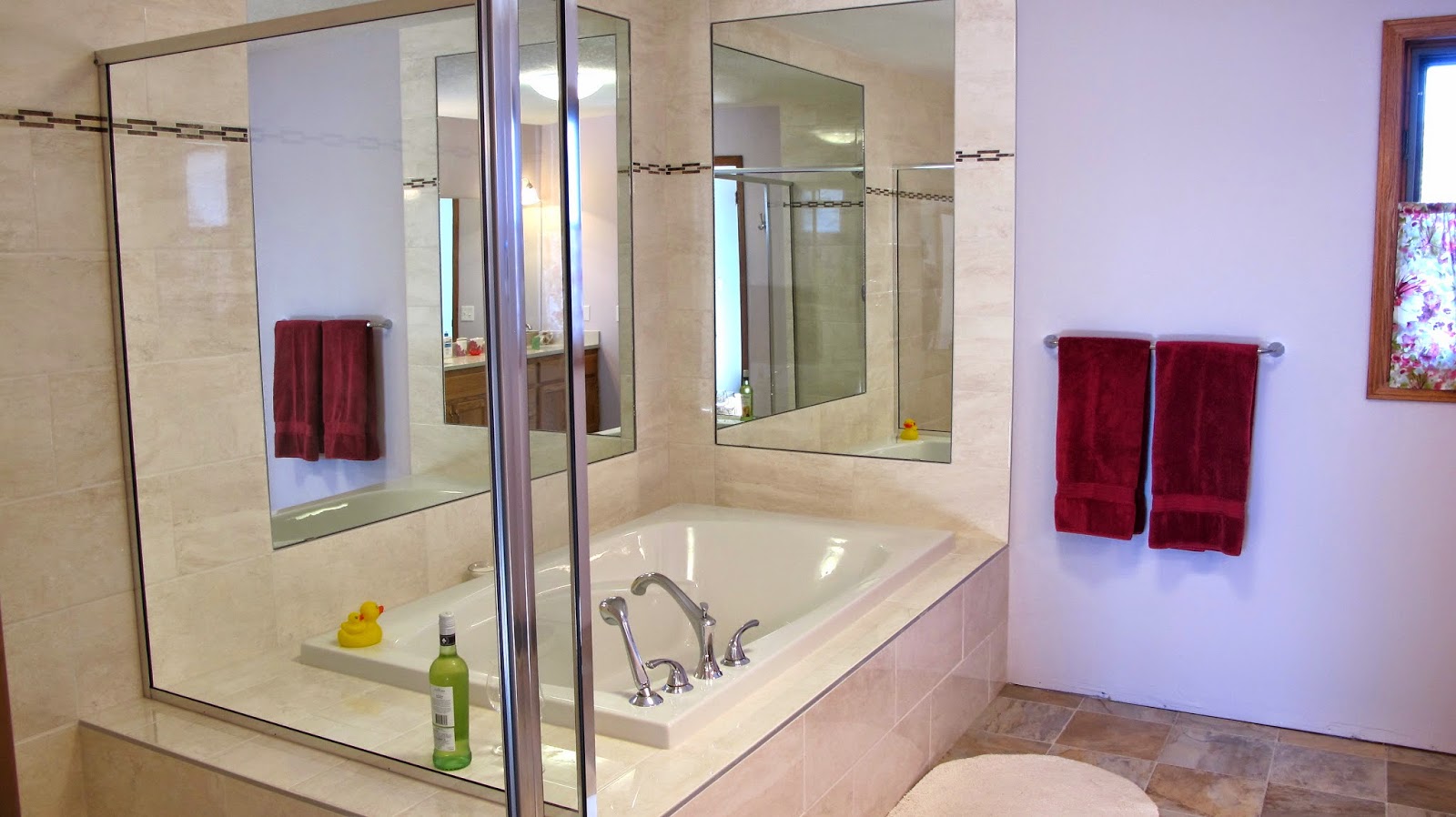 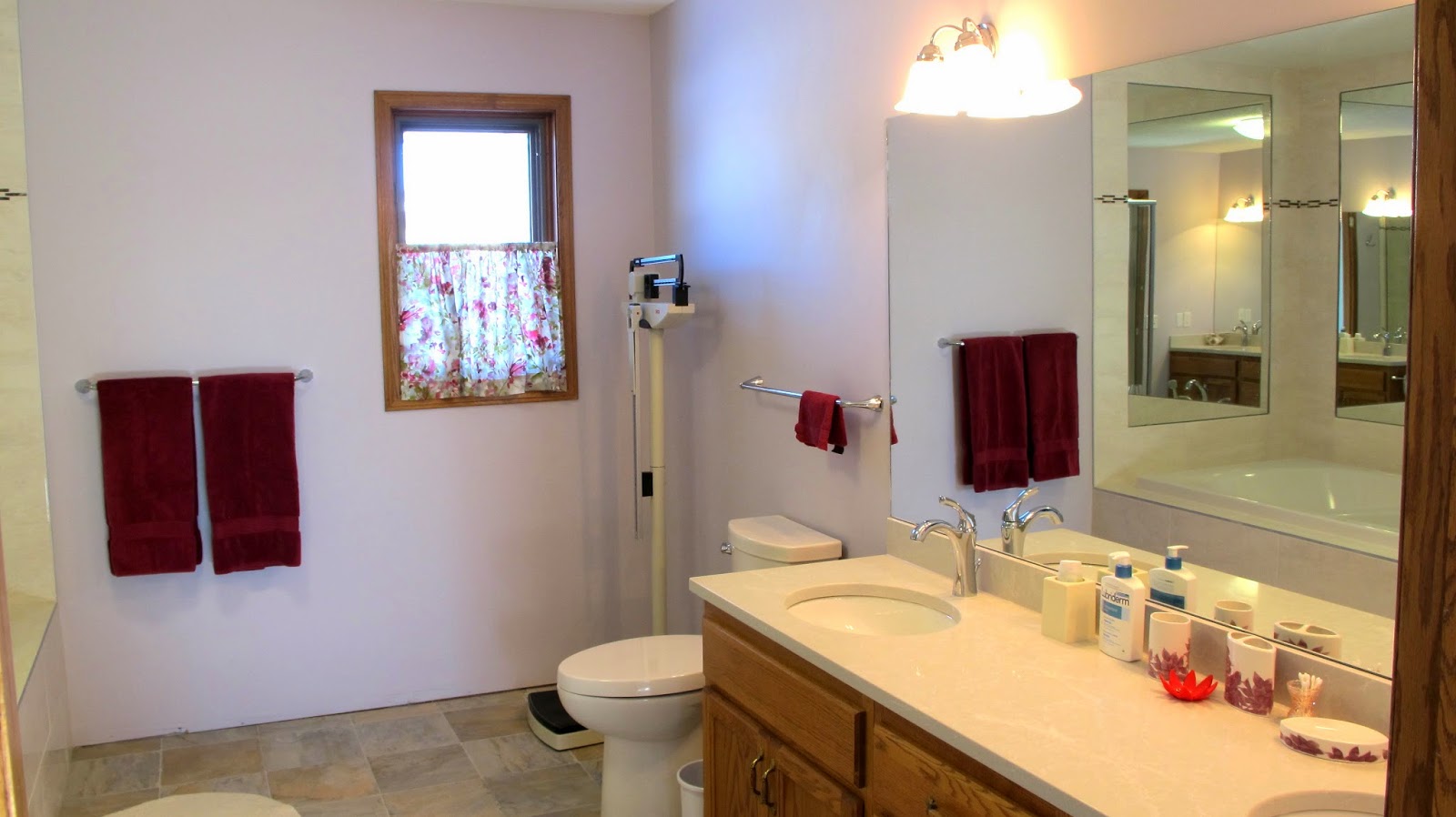 I made the curtain  - you can't see it all that well, but it has red in it to match the towels, and green that matches the bedding and curtains in the master bedroom.  Below is the huge shower! 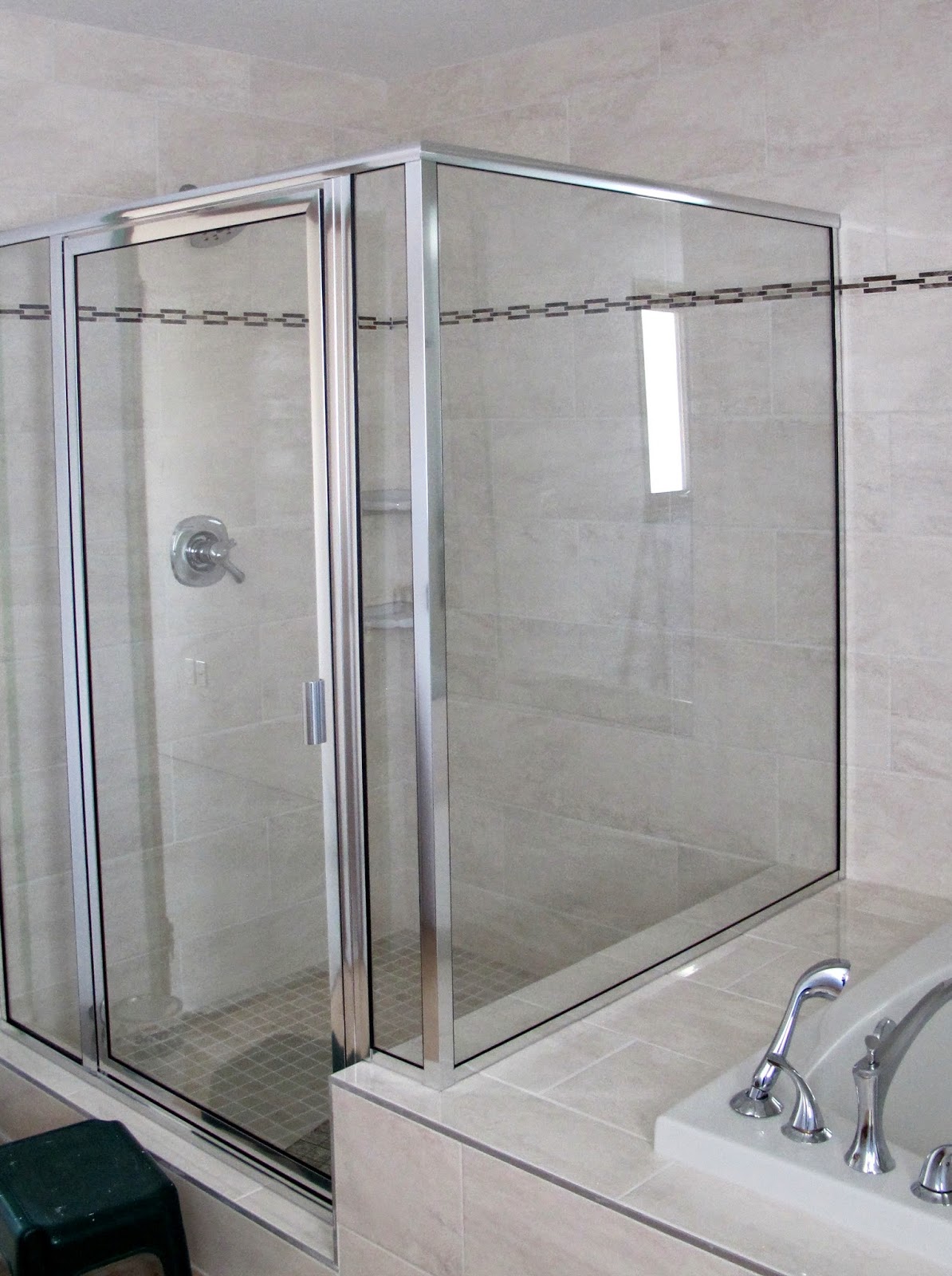 And the new fireplace: 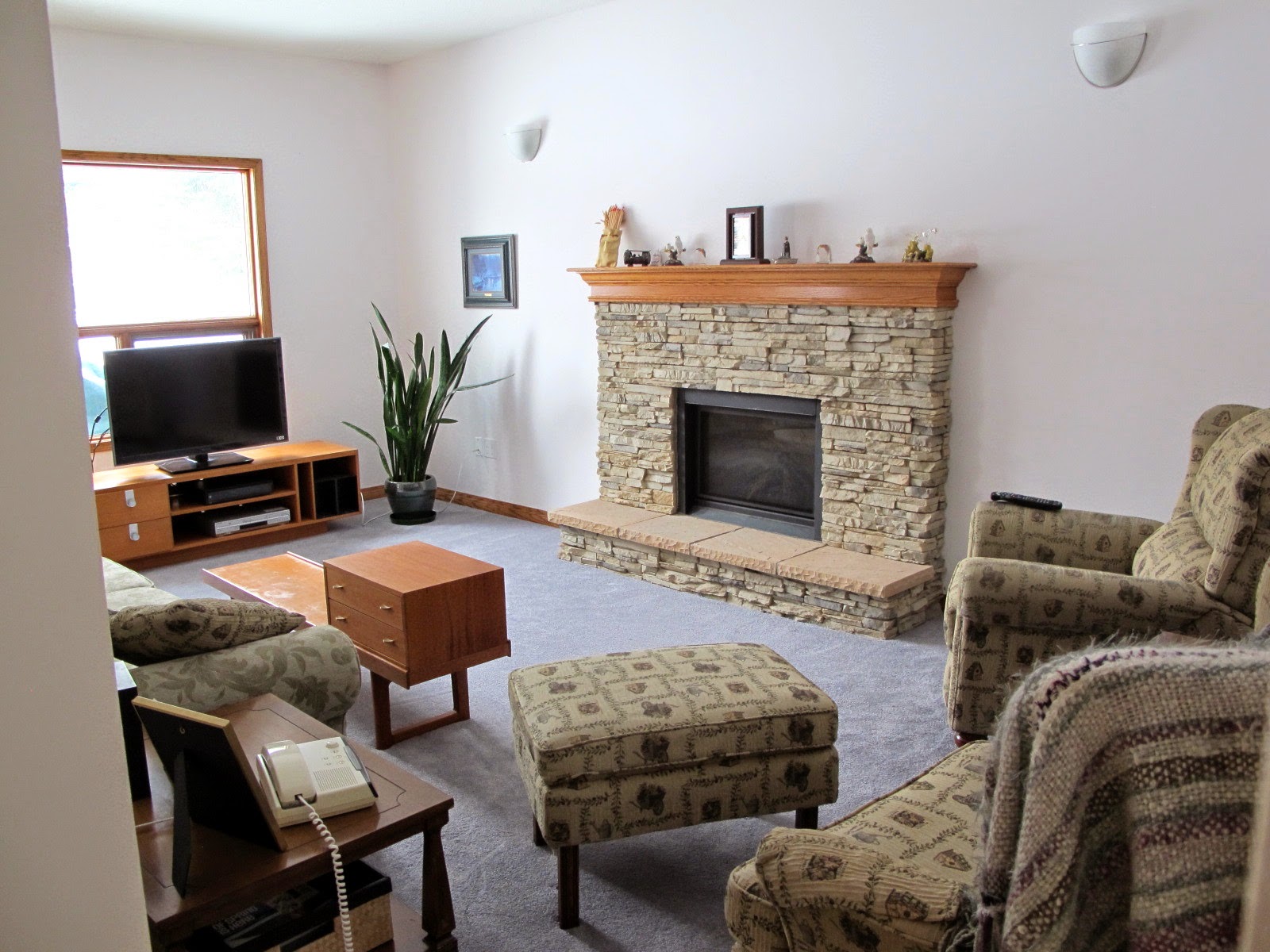 And new curtains in the kitchen, along with new light and table and chairs: 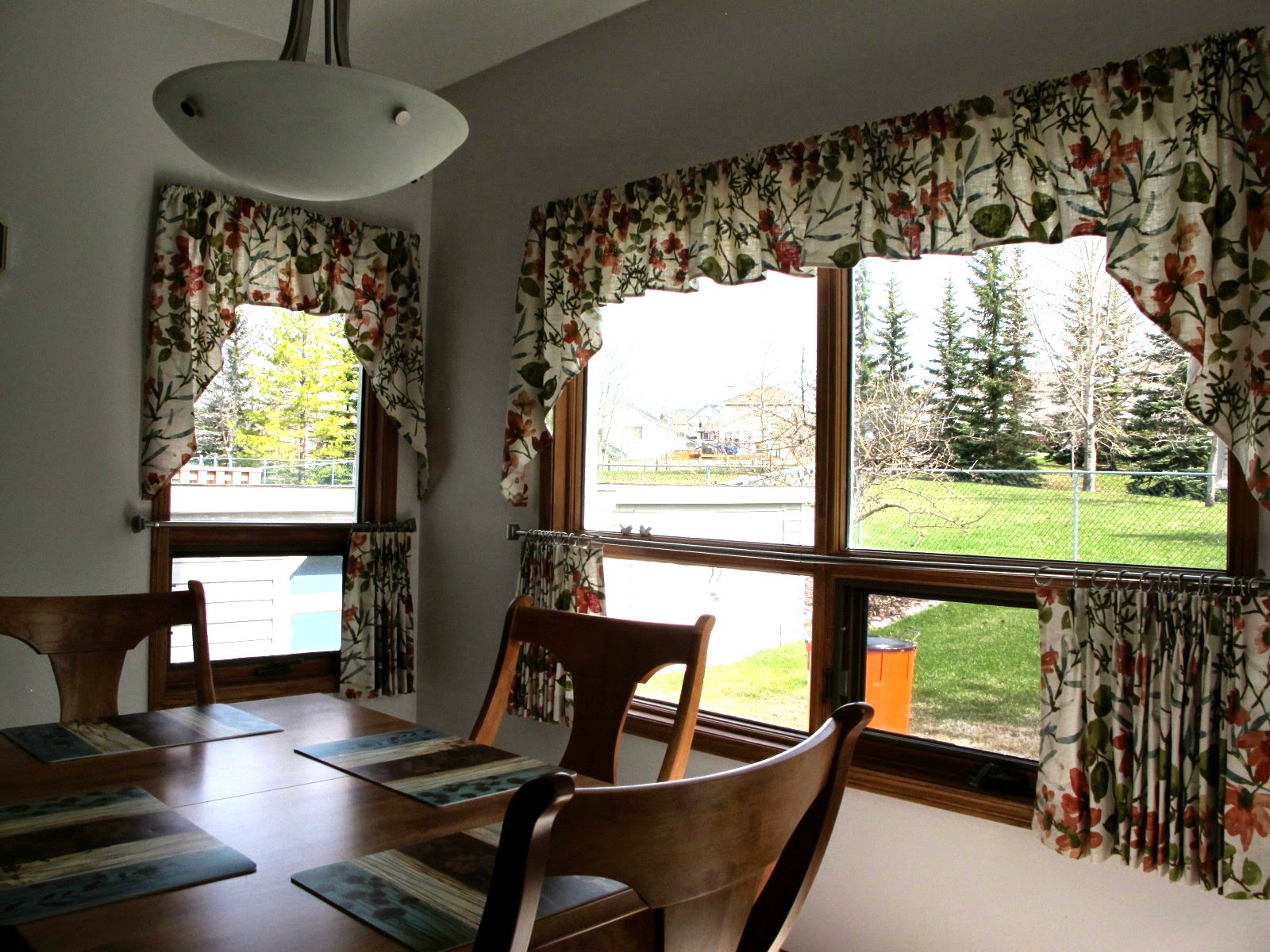 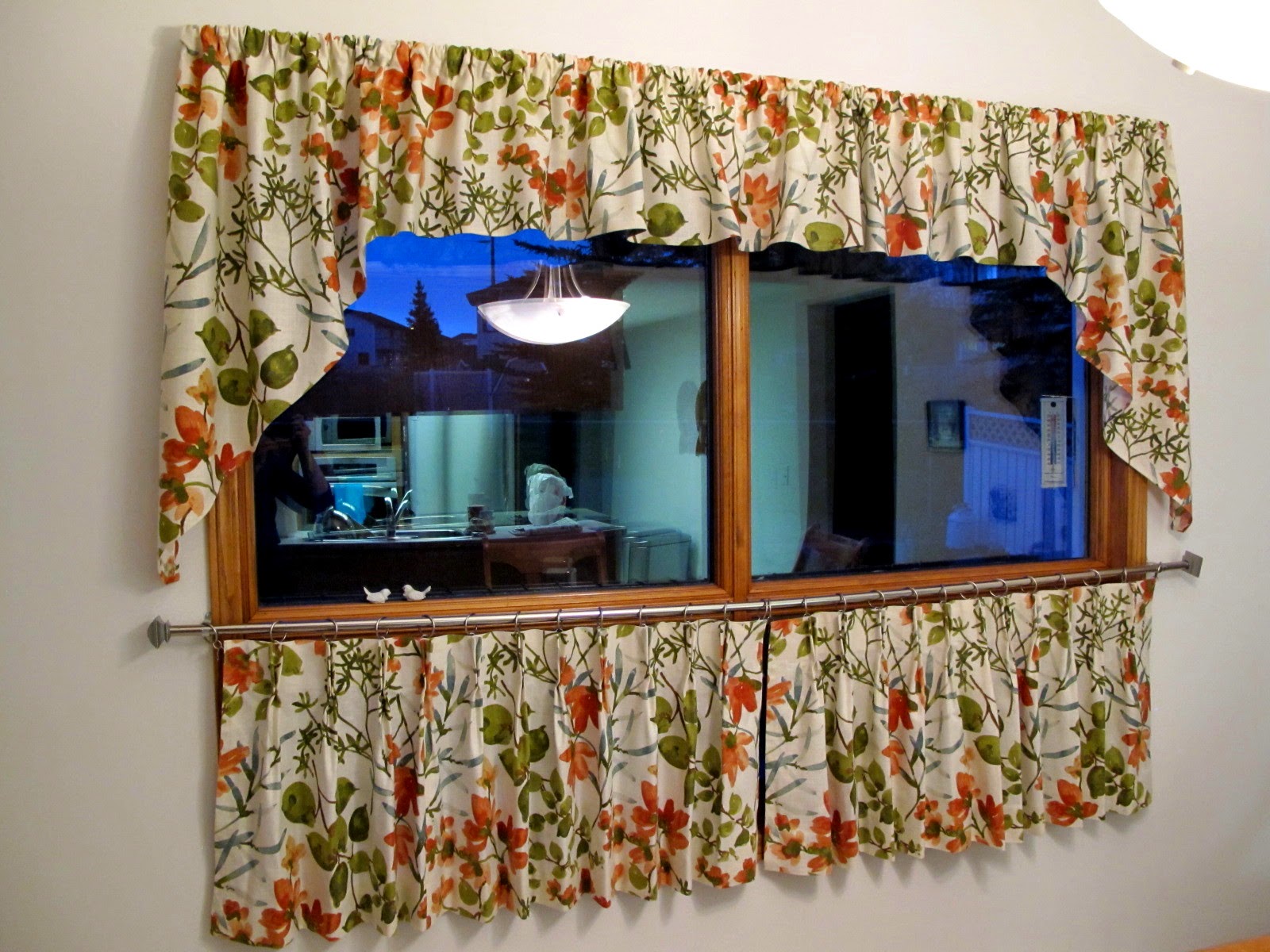 The fabric for the curtains came from a new-to-me online fabric shop in Toronto - Tonic Living.  They specialize in home dec fabrics and have a huge selection.  Their prices are are reasonable, as is their shipping cost.   They will send you swatches (that are about 6 inches square) for $1.50 - $1.75 apiece.  I ordered several before I chose the fabric.

I still need to make a set of curtains for the upstairs hall, and I'm going to make a valance for a bedroom with the Craftsy class, Sewing Custom Valances.  I'll be ordering the fabric from Tonic Living for those too.

So, not a lot of quilting in the last 4 or 5 months.  But, I will be going to the Heritage Park Festival of Quilts show next weekend, so I'll get my quilty fix!
Posted by Colleen at 12:01 2 comments: