I’m so glad that Leanne has decided to take over the Finish A Long for 2013.  I really need some incentive to get these UFO’s completed.  You probably wouldn’t think that if you saw my 2012 finishes – only 4 quilts!, but it IS incentive, believe me!  I wasn’t blogging in 2011, so I don’t have a record – but, from memory, I think I only finished 2 quilts that year.  So, the Finish A Long has helped me double my output!
In any event, I now have to set some goals for this first quarter.  Here they are:

First, I have some blocks from a Block of the Month that I did several years ago.  I had purchased fabric to make the entire quilt out of them, including enough to do some alternate blocks.  Then they sat.  And sat.  This year, my niece bought her first house, and I was trying to think of a housewarming gift.  My mom suggested that I make her placemats, and told me she likes jewel tones.  Well, I just happened to have 12 batik blocks – in jewel tones!
I made 4 placemats and a table runner for her.  My DD took the photos with her phone, so the colour is not that great. 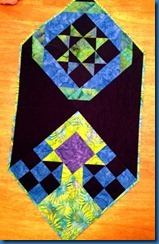 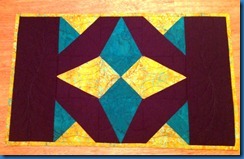 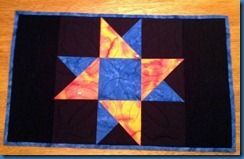 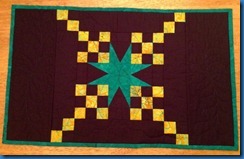 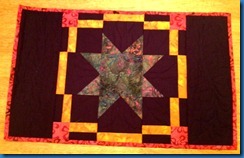 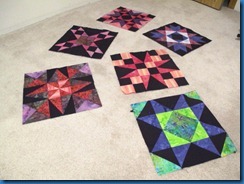 I plan to do the same with them – one table runner, and 3 place mats.  I haven’t decided yet if I will use them myself, or save them for a gift, but I’ll get them done!

Second goal is a carry over from 2012.  I have not done any more work on the Freebie Fifteen quilt, since September. 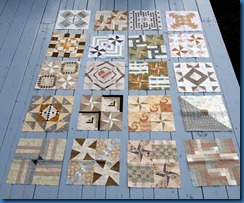 I have 3 blocks to complete on this one.  At least, I think I do – it’s been awhile since I’ve looked at it!  And a bunch of quarter square triangle blocks for the border.  There are 24 twelve inch blocks, and I’m going to put them together with sashing, so it will probably end up twin size.  I have no idea what I will do with this once it’s done, but I really want to get it done.

That’s it.  Two goals are enough for one quarter for me!  I’m looking forward to seeing everyone else’s goals.
Posted by Colleen at 18:33

I really like the placemats, What a wonderful gift for a housewarming.

great finish. this is a good idea to make some placemats. i have far too many unfinished projects and block sets sitting around.

Those two goals are good, the projects are beautiful. I hope the FAL works for you, I am sure hoping to see these when they are finished.