At the beginning of this quarter, I had three projects I planned on finishing for the Quilter in the Gap Finish-A-Long.

The first was my son's Blue Bayou quilt - which had also been on my first quarter and second quarter lists. Because it is a huge quilt, I had made it in two halves, and the plan was to quilt each half, then sew the two together.  Frankly, the plan terrified me - resulting in supreme procrastination.

Here is the status of that quilt. 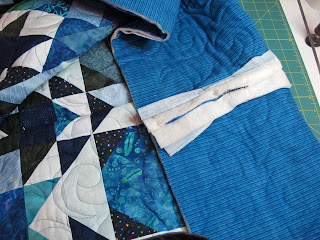 Yes, I have quilted the two halves, and the front has been sewn together!  The points don't match exactly, but close enough!  I just have to hand stitch the joint in the back and put the binding on.  So that one WILL be done next quarter!

The next quilt looked like this at the start of the quarter: 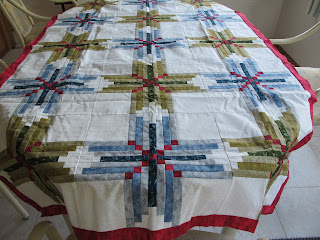 I just had to put the border on, then quilt it.

Yes, I admit it.  I have not touched this quilt this quarter.  Too busy procrastinating about Blue Bayou!

The only project that I did finish is this one - the table runner I showed you last week:

Email ThisBlogThis!Share to TwitterShare to FacebookShare to Pinterest
Labels: Finish-A-Long

Sometimes you just have to dive in and trust it WILL work, Blue Bayou is going to be spectacular when it's finished. :)

I just love the 2nd quilt you featured that you put the border on--is that pattern still around--it reminds me of the bargello quilt I made years ago that now sits on my guest room bed....lovely work Julierose