You Won't Get the Best of Me!!

You may remember this post, where I was whining about the difficult block in the Sand and Sea Glass BOM.  If you recall, there was a part of the pattern that looked like this:

The instructions were to cut out all of those tiny little triangles using templates and sew them together.  Twice - there are two units.  (In case you're not totally insane after the first one.)

After much hemming and hawing, and seriously considering ditching the whole thing, I decided to draft myself a paper piecing pattern. 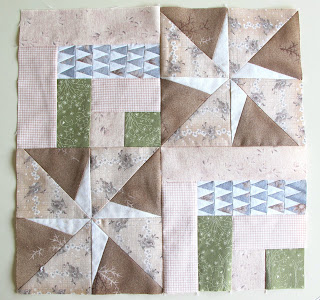 The entire block is 12 1/2 inches, so you can see how tiny those little triangles really are.  This block took me about 6 hours to complete - not including the drafting time.

Here is a close up: 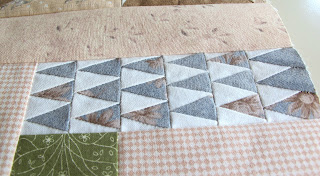 It's not perfect, but it's done.  Mr. CQT was taking a careful look at it, and said, "Is there supposed to be that overlap there?" - meaning the cut off parts of the triangles.  I snatched it away and replied, "They told me that you non-quilters weren't supposed to notice those things!"

Meanwhile, I had a bit of  a setback working on this month's block.  The instructions said to cut 12 strips 1.3/16 inch wide.  Even with my bifocals, I missed that tiny little dot, and cut them ALL 13/16 inch wide.  And sewed them together.  Then realized that the resulting strip sets were WAY too small.  Oh well - it's only fabric.
Posted by Colleen at 21:14

Looks perfect to me! What a wonderful block. Great job.

SO tiny! I have paper pieced many difficult areas and found it really made things easier. But those triangles are so small!! Great block!

Looks great to me. You are a clever lady triangles are beyond me.
Cheers Pauline